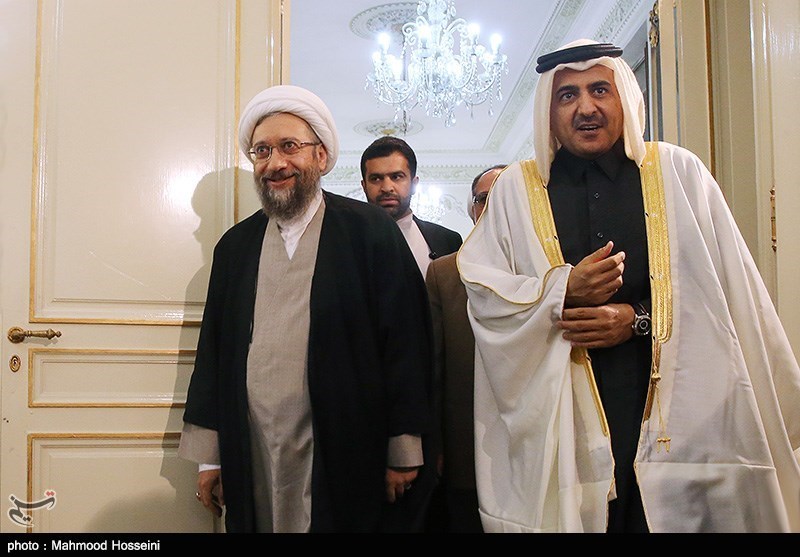 TEHRAN (FNA)- Chairman of the Supreme Judiciary Council (SJC) of Qatar Masoud bin Mohammed Al-Amri described radicalism and extremism as the main obstacle to the Muslim nations’ development and peace, and called for unity among all countries, specially the Muslim states, to help alleviate violence and radicalism in the world.

“Radicalism and extremism are hurdles to development, progress and peace in the world,” Al-Amri said in a meeting with Iranian Judiciary Chief Sadeq Amoli Larijani in Tehran on Sunday.

He reiterated that any religion or religious sect might experience extremism, and called for consensus among all the world governments to curb violence and radicalism.

The chairman of the Supreme Judiciary Council of Qatar further pointed to the Tehran-Doha relations, and said, “Expansion of relations between Iran and Qatar is not a threat to the region, rather it will contribute to the restoration of stability and security to the region.”

Al-Amri underlined that his country welcomes expansion of relations with Iran, and said, “Good neighborly relations takes place with good will and Iran and Qatar have been pioneers in this regard and I hope that such meetings help further consolidate the Iran-Qatar relations.”

Both Iran and Qatar have recently augmented efforts to further expand ties and cooperation in all different political, economic, defense, security, judicial and cultural fields.