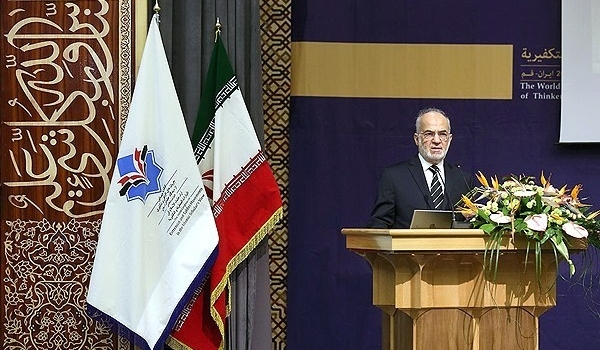 TEHRAN (FNA)- Iraqi Foreign Minister Ibrahim al-Jafari called on Muslim scholars to enlighten the world people about the terrorist acts that the Takfiri groups commit in the name of Islam.

The Iraqi foreign minister made the remarks addressing the ‘World Congress on Extremist and Takfiri Movements in the Islamic Scholars’ View’ in the Holy City of Qom, Central Iran, on Sunday.

“It is the duty of Muslim scholars to enlighten the people about the terrorist acts which are taking place in the name of Islam,” Jafari said.

Iran has always attached crucial importance to paving the way for the enhancement of interaction and cooperation among Muslim nations in a bid to strengthen Muslim unity throughout the world. Holding the World Congress on Extremist and Takfiri Movements in the Islamic Scholars’ View is another effort in the same line by the Islamic Republic to forge unity among Shiite and Sunni Muslims.

Tens of senior Muslim clerics from across the world have taken part in the Congress in the holy city of Qom.

In June, Supreme Leader of the Islamic Revolution Ayatollah Seyed Ali Khamenei underlined complexity of the plots hatched by the enemies who use any means, even Islamic appearance, to create rift among various sects in Islamic societies, including Iraq.

Addressing a group of Qur’an reciters, the Iran’s Supreme Leader said that “the enemies’ intelligence apparatus” plays a role in fueling civil conflicts in a number of Islamic communities.

Praising the deep level of insight of the Islamic Ummah, Ayatollah Khamenei underscored, “The enemies of Islam are afraid of this fact and try to confront Islam in the name of Islam and under the cover of Islam.”

“The American Islam, despite having Islamic appearance and name, complies with despotism and Zionism… and totally serves the goals of despotism and the US,” stated the Leader.