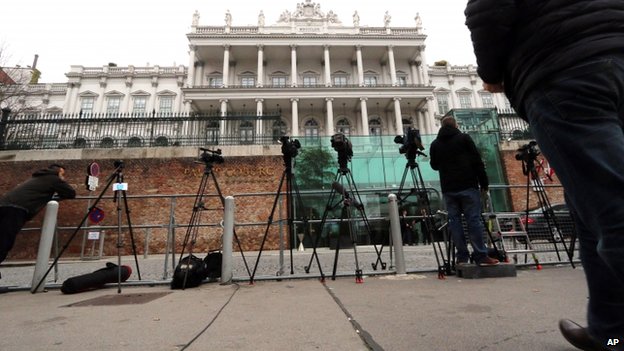 Doubts are growing that Monday’s deadline for a deal on Iran’s controversial nuclear programme will be met at talks in Vienna in Austria.

Both the US and Germany said the sides were working to close “big gaps”, with some suggestions that the deadline could be extended.

Six world powers want Iran to curb its nuclear programme in return for the lifting of United Nations sanctions.

Iran rejects claims that it is seeking to build nuclear weapons.

It says its programme is purely peaceful for energy purposes.

Representatives of the so-called P5+1 group – Britain, China, France, Russia, the US plus Germany – are taking part in the negotiations with Iran in the Austrian capital.

On Saturday, US Secretary of State John Kerry said: “We’re working hard. We hope we’re making careful progress, but we have big gaps… which we’re working to close.”

He spoke after postponing his trip to Paris in order to meet Iranian Foreign Minister Mohammad Javad Zarif – their fourth talks in three days.

German Foreign Minister Frank-Walter Steinmeier called the negotiations so far “constructive”, but added: “That must not mask the fact that there is still a big gap between us in many aspects.”

The BBC’s Bethany Bell in Vienna says a lot is at stake as a deal could change the politics in the Middle East. However, she says it is still not clear if the sides can make the difficult political decisions, with some observers saying more time may be needed.

One European source told the AFP news agency that there had been “no significant progress” and “the chances of getting a deal are pretty reduced”.

A senior US official was quoted as saying that the aim remained getting a deal by Monday night, “but we are discussing both internally and with our partners a range of options”, AFP reported.

At the same time, an Iranian source told the BBC that the team remained confident a complete deal was still possible, suggesting the deadline could be extended by a couple of days.

The New York Times reported that a key US concern was to prevent Iran from producing a bomb at undetected nuclear locations – referred to as a “sneakout”.

The Times quoted one participant in the talks as saying that the goal was to “make as airtight as possible” the language that would allow highly intrusive inspections.

The P5+1 group and Iran reached an interim agreement a year ago. But the two sides failed to reach a lasting deal by July, as initially agreed, and extended the deadline until 24 November.

Iran has been resisting efforts to scale back its nuclear programme for nearly a decade.