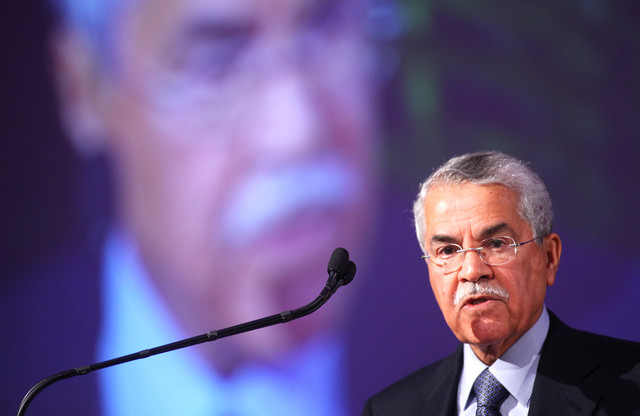 Iran may propose that OPEC cuts its output target by as much as 1 million barrels a day to prop up prices when the country’s oil minister meets his Saudi counterpart as the group gathers this week, Mehr News reported.

Bijan Namdar Zanganeh and Saudi Arabia’s Oil Minister Ali Al-Naimi will confer on the sidelines of the meeting in Vienna of the Organization of Petroleum Exporting Countries to define a common view among its 12 members for supporting crude prices, state-run Mehr reported, without saying where it got the information. An official in Iran’s ministry didn’t immediately comment when contacted by phone.

OPEC, supplier of about 40 percent of the world’s oil, will meet Nov. 27 in the Austrian capital to assess its collective output amid a supply glut and a 27 percent drop in prices this year. Half the analysts in a Bloomberg survey last week forecast that OPEC would cut production to shore up prices, while the other half said they didn’t see it deviating from an official 30 million barrel-a-day production target.

“It would be supportive to the market,” Tom James, managing director of consultancy Navitas Resources, said by phone from Dubai, referring to a possible OPEC cut. “I’m not sure it would be enough to really push up prices and to get them back into the $90s.”

The drop in Brent crude, with the global benchmark trading at less than $80 a barrel last week, has prompted speculation of an OPEC cut. Officials from oil-producing countries stepped up diplomatic visits before the group’s meeting, discussing how to react to the plunge in prices to a four-year low.

James said he expects OPEC will refrain from announcing any output reduction this week since he sees prices stabilizing. Rather the group will monitor prices and demand into the first quarter next year to determine if a cut is warranted at that time, he said.

Zanganeh may also meet with Alexander Novak, Russia’s energy minister, in Vienna this week, Mehr reported. Russia, while not an OPEC member, said it will send Novak and Igor Sechin, head of state-controlled OAO Rosneft, the country’s largest crude producer, for meetings with OPEC officials.

Two-thirds of global oil production comes from non-OPEC producers, Suhail Al Mazrouei, the U.A.E.’s energy minister, said in comments on his Twitter account today. Producers, particularly those pumping crude from shale formations, “shall be concerned as we are in OPEC” about stability in crude markets and about finding a sustainable balance between supply and demand, he said.

International sanctions imposed on Iran over its nuclear program are choking the Persian Gulf nation’s crude exports. The government in Tehran is negotiating with the U.S. and five other world powers for an agreement to lift the curbs. The countries have set a Nov. 24 deadline for final agreement, three days before OPEC meets.

Reaching agreement by the deadline is impossible because of the large number of details still to be resolved, the semi-official Iranian Students News Agency reported, citing a member of the Iranian negotiating team it didn’t identify. The parties will start discussing terms for an extension of the talks by the end of today, ISNA reported.