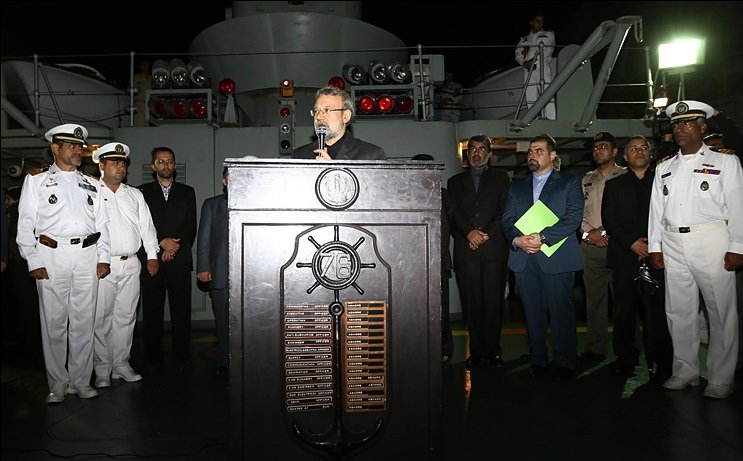 Majlis Speaker Ali Larijani arrived in Djibouti City, the capital city of Djibouti in the Horn of Africa on Friday, at the official invitation of his Djiboutian counterpart to participate in a ceremony to inaugurate the new building of Djibouti parliament.

While visiting the Jamaran destroyer and Bushehr logistic vessel docked at Coast of Djibouti, he commended the personnel on these two vessels and said, “some short-sighted countries which had failed to comprehend the Islamic Republic’s policies, believed that Iran was causing insecurity. But now they have realized that Iran is a peaceful country and brings security to the region.”

“In recent years, a series of conflicts have occurred across the region, but Iran’s navy fleet has been putting a lot of endeavor to bring back security to the region,” he added.

Later that day, Ali Larijani attended the ceremony to inaugurate the new building of Djibouti parliament built by Iran, and said, “this wisely-conducted act reveals the close and friendly ties between the two countries and bears a testament to our commitment and desire to strengthen bilateral cooperation.”

Larijani pointed to Africa’s special place in Iran’s foreign policy and said, “the valuable cooperation of the Republic of Djibouti in combating piracy will have a significant impact on the safety and trade in the region, and this commitment has come into many countries’ attention, including Iran.”

Larijani expressed hope that the inauguration of the new building of Djibouti parliament will begin a new chapter in Iran and Djibouti bilateral relations.