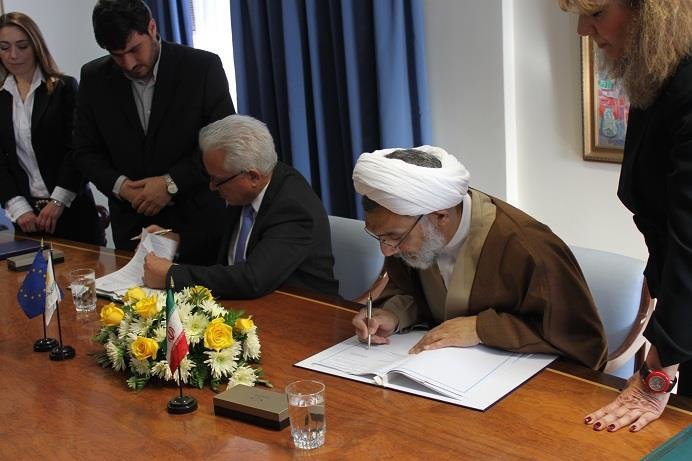 In his trip to Cyprus, Iran’s Justice Minister Mostafa Pour-Mohammadi met and discussed with his Cypriot counterpart.
Elaborating on the legal structure of the Islamic Republic, Iran’s Minister of Justice explained the Justice Department’s role in coordinating between three branches of government and their missions.

Noting that  judicial cooperation paves the way to cooperate and deepen  the trust among countries in all fields, Mostafa Pour-Mohammadi found the agreement on transfer and extradition of criminals between the two countries very auspicious and stressed that Legal and judicial cooperation between the two sides does not stop at this stage and the Islamic Republic of Iran is prepared, if the Cyprus government is willing, to provide preliminaries for negotiations and signing agreements of civil assistance in legal and criminal cases.

During the meeting, the two sides emphasized on the need to develop ties at different levels, and signed extradition agreements on the transfer of convicts.

According to the report, Iran’s Justice Minister met and discussed separately with some officials, including the Attorney General, the Chief Justice and a group of eminent judges.

In their meetings, both sides expressed satisfaction with expansion of the relationships in different fields and marked signing agreements on the exradition of criminals as a way of developing more bilateral ties between the two sides.