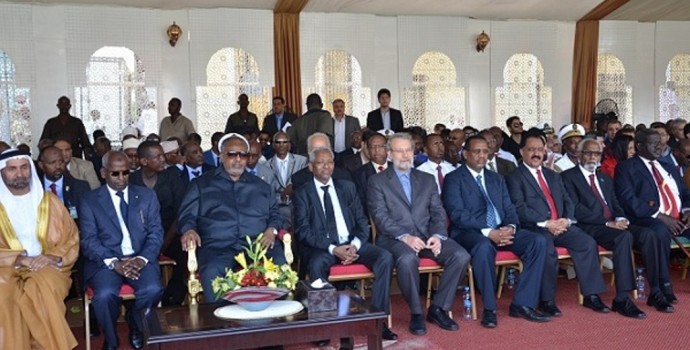 Djibouti (HAN) November 23, 2014 – Public diplomacy and Regional Security and safety news. The Iranian parliament speaker arrived in Djibouti and described Djibouti as a “friend and brother” country and called for the expansion of Tehran and  Djibouti strategical Horn of Africa ties.

“We hope that the two countries will be able to expand economic relations and increase the volume of trade ties,” the Iranian parliament speaker noted.

Iranian Parliament Speaker Ali Larijani, also said expansion of ties between cooperation between Iran and Djibouti can step up the fight against piracy and help Somali parliament to safeguard the current institutions for safety and security of Somali people; as well as Horn of Africa and Arabian Gulf.

Ismail Omar Ghele, the Djibouti president, for his part, expressed the hope that bilateral ties between the two countries and Somalia would be promoted in all spheres for the sake of the brotherly people of Djibouti, Somalia and Iran.

Ismail also praised the Iranian architects for constructing the new building of Djibouti’s National Assembly.
Larijani and Jawari  arrived in Djibouti city on Friday at the official invitation of his Djiboutian counterpart to participate in a ceremony to inaugurate the new Djibouti parliamentary building in Djibouti.