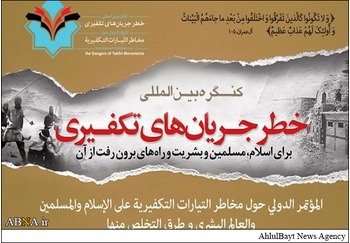 TEHRAN (Tasnim) – Muslim scholars around the world are slated to convene in Iran’s central city of Qom to exchange views on threats posed by extremist and Takfiri groups.

The holy city of Qom is planned to host “the Global Conference of Muslim Scholars’ View on Takfiri and Extremist Currents” from November 23 to 24.

The conference, due to be chaired by Grand Ayatollah Nasser Makarem Shirazi, will be held with the aim of countering the sedition of Takfiri groups and calling for peace, friendship, brotherhood and interaction among faiths based on wisdom.

The conference will also seek to caution Muslims against the ugly nature of Takfiri currents in a bid to create a unified front against the groups and provide further grounds for integration of Muslims in a bid to deal with Takfirism.

The conference also aims to shed light on the West’s plots against Islam given the westerners’ support for Takfiri groups.

The Islamic State in Iraq and the Levant (ISIL), as a Takfiri group in Iraq and Syria, is believed to be supported by the West and some regional Arab countries.