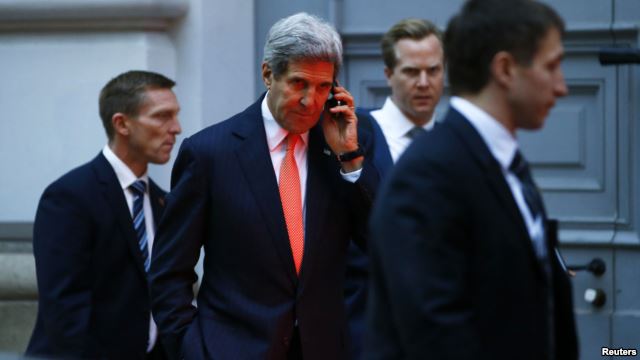 Iran talks progress behind the scenes

U.S. Secretary of State John Kerry makes a phonecall after a meeting in Vienna, Nov. 21, 2014.

VIENNA—Talks on the future of Iran’s nuclear program and international sanctions against the country continued in Vienna Friday, amid indications of behind-the-scenes developments that officials will not specify.

Russian Foreign Minister Sergei Lavrov consulted with Kerry by phone, and said in Moscow that all the elements are on the table, but what he called more effort is needed. His ministry said he might come to Vienna over the weekend.

British Foreign Secretary Philip Hammond said there is still a “significant gap,” but added that if Iran shows flexibility the international team is ready to do the same.

“These are very complex issues and there’re still a very significant gap between the parties,” he said. “We are all going to go away and have further technical discussions with our experts. We will resume again over the course of the weekend.”

Meanwhile, Minister Zarif reportedly scheduled and then cancelled a return to Tehran for consultations. And Secretary Kerry’s staff announced he would leave for Paris, and then said he would stay after an evening meeting with Zarif.

It was all intriguing but not definitive. Experts had expected lots of posturing during the final days, with nothing finalized until the midnight Monday deadline, or possibly even later.

Kerry said earlier Thursday that there are no plans for an extension.

The negotiations were originally due to end in July, but with no agreement in place the two sides decided to give themselves another six months.

Both sides have significant motivations to reach an accord. Iran wants an end to crippling economic sanctions and the U.N. team wants verifiable assurance that Iran cannot secretly or quickly build a nuclear weapon.

Friday’s posturing was not surprising, and it is impossible to know exactly what is behind it. But the talks have three days to go before the deadline, so more of the same would not be surprising.

Iran and six world powers — the U.S., Britain, China, France, Russia and Germany — have been trying for a year to reach a deal that would scale back Iran’s nuclear program in exchange for reduced sanctions.

The U.S. and its allies have long argued that Iran is trying to build nuclear weapons. Iran says its nuclear research is only for peaceful purposes.

Still, the director of the Middle East Program at the Oxford Research Group in London, Gabrielle Rifkind, says there are downsides to not reaching an accord.

She is referring to the militant group in Syria and Iraq called ISIS, or Islamic State, which both the United States and Iran oppose. It is the latest example of what analysts see as potential areas for U.S.-Iran cooperation if they can get past the nuclear issue.

Because of that, and the desire of the Iranian people to be free of the economic sanctions, the director of the international program at Durham University, Anoush Ehteshami, says Minister Zarif and his team should be able to get a deal approved, even with unpopular compromises.

“The leader has already given his backing to the negotiations by sticking, despite much criticism against Foreign Minister Zarif and the president, sticking with the team and cautioning others not to disrupt the negotiations,” said Ehteshami.

But there are many opponents of a deal. In Iran, a large number of hardliners, some with financial interests in its nuclear program, oppose any deal. And in the United States, many conservatives believe Iran can never be trusted with any nuclear technology. U.S. allies Israel and Saudi Arabia have a similar view.

U.S. Vice President Joe Biden visits Turkey Friday for talks, while Kerry met on Thursday with the foreign ministers of France and Saudi Arabia to discuss the negotiations on Iran’s atomic program. President Obama met with the Saudi National Guard minister in Washington earlier this week.