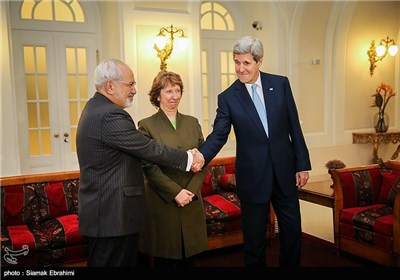 According to IRNA’s dispatched reporter, John Kerry arrived in Vienna from Paris to join the Vienna 8 negotiations, which is supposed to be the last round of talks to lead to the signing of a comprehensive agreement by November 24.

The axis of Kerry-Zarif-Ashton talks will be deciding over the schedule of this round of negotiations as well as efforts made to resolve the remainder of disputes over Iran’s uranium enrichment and ways for lifting the anti-Iranian sanctions.

According to the US Department of State, Kerry had before these talks been engaged in bilateral and trilateral negotiations with the Iranian nuclear negotiation team to be informed about the latest stands of Tehran in Vienna 8.

The US secretary of state had also met and conferred his French and Saudi counterparts in Paris before arriving in Vienna.

In a joint press conference with Laurent Fabius and Saud al Faisal, Kerry said that the Sextet is not after extending the negotiations’ duration, but is negotiating to reach agreement.

‘We wish to reach an agreement, but not any kind of agreement. A practical agreement is to be achieved to ensure that the ways for getting access to nuclear weapons are blocked,’ he added.

The Iranian foreign minister and the other Islamic Republic officials have many times announced that achieving a favorable agreement in which the Iranian nation’s rights will be ensured is their objective.

Kerry was in London before visiting Paris, where he met the Omani Foreign Minister Youssef Bin Alawi for the second time in as many weeks after their meeting in Muscat.

Bin Alawi unofficially visited Tehran after his meeting with Kerry and had meetings and consultations with Iranian President Hassan Rouhani and Foreign Minister Mohammad Javad Zarif.

Oman Sultanate has always played a mediating role between many countries, including Iran and the United States and had also mediated between the two sides before the Geneva Nuclear Agreement.