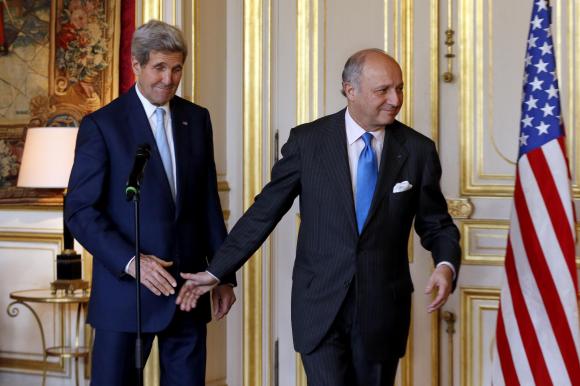 (Reuters) – A year after France scuppered a deal on Iran’s nuclear program it is taking a softer stance in current talks, encouraged by a more inclusive U.S. approach and the knowledge that failure this year could have grim repercussions across the broader region.

France, a U.N. Security Council veto-holder, has long held out for strict terms trading a loosening of international sanctions on Iran’s oil-based economy in return for commitments by Tehran to show its nuclear work is as peaceful as it insists.

The discovery last year that the U.S. was holding secret talks with the Iranians was an opportunity for France, by saying ‘no’ to a deal, to assert itself internationally and rebuke Washington for backing down on bombing Syria as punishment for using chemical arms.

This time round however a failed agreement would have potentially dire consequences given Iran’s important role among international powers trying to push Islamic State out of Iraq and Syria and stabilize other parts of the Middle East.

That’s something France’s diplomats do not want to take responsibility for.

“Affirming oneself on the international scene when there is something so important at stake for the region and international relations is inappropriate,” said Didier Billion, deputy director at Paris-based think tank IRIS.

“I don’t think it will happen again. I think there is an effort by the French to try and make themselves look a little better with the Iranians. We will be less narrow-minded.”

The Americans have also learned from last year: U.S. Secretary of State John Kerry has gone to great lengths to ensure that Paris is kept abreast of U.S.-Iran talks.

Asked on Thursday about France’s position, Kerry told reporters in Paris that the two countries had a “shared” position, and that Fabius had handed him a piece of paper outlining his four key concerns.

“The Americans and French both learned a lesson in Geneva. The Americans have to consult with all members of the E3+3 and the French learned that it’s better to raise objections early on,” a Western official close to the talks said.

“I think things are better this time around, although there will always be nuances within the (six).”

In return, the French have also been conciliatory.

“We made our point last year. What we want is a good deal, one that is verifiable and one that sends a strong message to the rest of the region to show that we haven’t been soft on Iran,” said a French government official.

“We all agree that it’s Iran that needs to move. If there is a good deal, we aren’t going to block it. I don’t think we have any fundamental differences with our partners, including the United States,” the official said.

Paris repeatedly points to its longstanding hard line on weapons proliferation as proof it is acting from a point of principle when it comes to negotiations with Iran.

But it is also true that the more hawkish shift toward Tehran under Prime Ministers Nicolas Sarkozy and Francois Hollande has helped a commercial rapprochement with Gulf States Qatar and more recently Saudi Arabia.

Some diplomats say also that France’s recent position has been influenced by Foreign Minister Laurent Fabius, who is a supporter of Israel and was prime minister in the mid-1980s when Iran was suspected of terrorist attacks in Paris.

Now however economic factors have forced Fabius to adapt his position.

As Paris struggles to kickstart sluggish domestic growth and watches Germany increasingly shape European Union policy, the pressure is on it to expand its international markets further.

While French officials remain optimistic of securing more large deals in the Gulf, they also know that in the event of any deal with Iran, its European and American partners would be well ahead of France in any subsequent business transactions.

“I think Fabius, who has pushed for a new economic diplomacy, knows that we are potentially losing a very big market that will open to the world,” IRIS’ Billion said.

Meanwhile another senior French diplomat summed it up slightly differently.

“I think fundamentally we’re right and that Iran wants the nuclear bomb. They are cheating and aren’t respecting their word, but our options are limited,” the diplomat said.