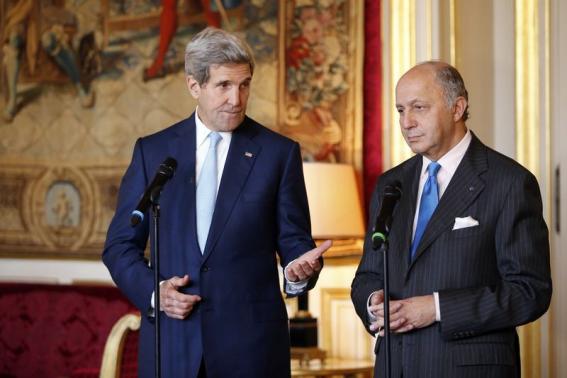 (Reuters) – A deadline for resolving a 12-year-old dispute over Iran’s nuclear programme may be extended from Monday until March, because of sharp disagreements between Tehran and Western powers, officials close to the talks said on Thursday.

U.S. Secretary of State John Kerry was due to meet Iranian Foreign Minister Mohammad Javad Zarif later on Thursday in Vienna with European Union envoy Catherine Ashton to try to break the stalemate.

Washington and its allies had hoped this week’s Vienna talks would be the culmination of months of difficult diplomacy between Iran and the United States, Britain, France, Germany, Russia and China on a comprehensive agreement.

The aim is to remove sanctions on Tehran in exchange for curbs on its atomic programme, but the talks have long been deadlocked: the timing for lifting sanctions and future scope of Iran’s uranium enrichment are key stumbling blocks.

“Important points of difference remain,” French Foreign Minister Laurent Fabius told a joint news conference with Kerry, who met him in Paris on his way to Vienna on Thursday.

The U.N. nuclear chief Yukiya Amano on Thursday highlighted another hurdle: Iran has yet to explain suspected atomic bomb research to the U.N. nuclear agency, one of the conditions of the six powers for lifting sanctions.

The latest round of talks between the six and Iran began on Tuesday and are likely to last right up to the self-imposed Nov 24 deadline for a final agreement.

“Some kind of interim agreement at this point is likely, or perhaps at best a framework agreement by Monday that needs to be worked out in the coming weeks and months,” a Western diplomat told Reuters on condition of anonymity.

U.S. Deputy National Security Adviser Tony Blinken said this week a comprehensive deal would be difficult, but not impossible to achieve by Monday. British Foreign Secretary Philip Hammond said he was not optimistic but that there may be a way of extending the deadline.

“We need more time to resolve technical issues and don’t forget that the time frame for lifting sanctions is still a huge dispute,” the Iranian official said, adding that an extension until March was a possibility. Western officials also suggested March was an option, with a resumption of talks in January.

The officials said, however, that Iran and the six were not actively discussing an extension yet and would push for a deal by the deadline, which has already been extended from July.

“The talks have been going in an overwhelmingly tense atmosphere. Time is running out,” Russian Deputy Foreign Minister Sergei Ryabkov was quoted as saying by RIA Novosti news agency. Various meetings were under way and noone was talking about prolonging the talks, he said, adding: “I hope we will reach an agreement before Nov. 24.”

Officials close to the negotiations, which began in February, say that Iran wants all key sanctions on oil exports and banking terminated almost immediately, not merely suspended as the United States and European officials have said.

Tehran rejects Western allegations it is amassing the capability to produce atomic weapons and has refused to halt its enrichment programme.

It has been under international sanctions for eight years and the U.S., European Union and U.N. measures have slashed its oil exports, causing inflation to soar and the value of its currency to plummet.

Western powers say the sanctions can be suspended gradually and in line with moves by Iran to restrain its nuclear activities and terminated only after Tehran has demonstrated full compliance with the terms of any deal.

They also want Iranian restrictions to last for 20 years, while Iranians are pushing for either months or a small number of years, diplomats say.

Western officials say Iran has refused to budge on enrichment, despite repeated offers of potential compromises by the six powers, including the United States.

Tehran may consider keeping fewer enrichment centrifuges as long as they are advanced, to keep the volume unchanged, Western officials say, adding that this represents no compromise at all.

They say the West is willing to compromise but Iran is not largely because Supreme Leader Ayatollah Ali Khamenei has not given the negotiators the freedom to do so.

“The ball is in the Iranian camp and to be honest we have a feeling that we’re treading water at the moment,” a senior Western diplomat said. “The main obstacle is that the decisions have to be made by the Iranian leadership.”

The Iranians, however, pin the blame on Western powers, which they accuse of expecting too much from Tehran.

Iranian Foreign Minister Mohammad Javad Zarif said on Tuesday that Iran would resist Western pressure to make what it considered to be excessive concessions in the Vienna talks.