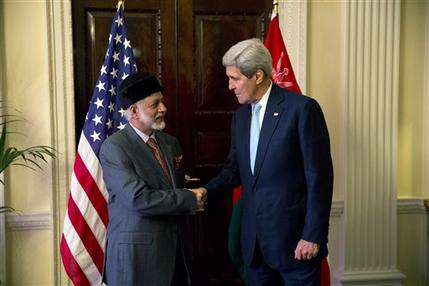 LONDON (AP) — With a deadline for Iranian nuclear deal fast approaching, U.S. Secretary of State John Kerry has embarked on a frenzy of high-stakes diplomacy in a last-minute push to secure an agreement – or at least prevent the process from collapsing.

As senior negotiators huddled for a second day in Vienna in the latest round of talks, Kerry held separate meetings in London and was to travel to Paris on Thursday for further discussions before deciding whether or when to join the larger effort in the Austrian capital to forge a pact that would prevent the Islamic republic from reaching the capability to produce atomic weapons.

Despite his efforts, though, signs increasingly pointed to the prospect that Monday’s deadline will be pass without a deal and the negotiations will be extended a second time.

In London, Kerry met Wednesday at his hotel with Foreign Minister Yusuf bin Alawi of Oman, which has emerged as a key bridge between Washington and Tehran, a senior U.S. official said. Bin Alawi was in Tehran last weekend and met with Kerry on Tuesday. Their follow-up meeting, Wednesday however, was unannounced and confirmed only after an Associated Press reporter saw the foreign minister in Kerry’s hotel.

Oman is not party to the negotiations among Iran, the U.S., Britain, China, France, Russia, the European Union and Germany. But unique among the Gulf Arab states for the close ties it maintains with Iran, it hosted high-level nuclear talks earlier this month and was the site of secret U.S.-Iranian gatherings dating back to 2012. Those earlier discussions laid the groundwork for an interim nuclear agreement reached a year ago, which the so-called P5+1 countries are now trying to cement with Iran in Vienna.

Details of Kerry’s meetings with bin Alawi were not immediately clear and U.S. officials were tight-lipped about any role Oman might play beyond that of an intermediary.

In Paris, Kerry will meet Saudi Foreign Minister Saud al-Faisal and French Foreign Minister Laurent Fabius. Those meetings are key because French objections last year delayed the adoption of an interim agreement by several weeks, and Saudi Arabia remains deeply concerned about the potential for its arch-rival Iran to win concessions from the West.

In Washington, meanwhile, Obama administration officials, congressional aides and independent experts who’ve closely monitored the discussions said an extension of the talks was most likely. And, in a twist, many opponents of a deal now see prolonged negotiations as more preferable than an accord.

Even though many U.S. lawmakers opposed an extension when the last one was announced in June, aides in both parties said an agreement now would be viewed as a sign of the administration’s desperation to secure a diplomatic breakthrough at any cost.

Republicans in particular want more time so that they can attempt to pass new sanctions legislation that would pressure Iran into greater concessions. The Senate’s plan is to bring up a package of conditional penalties after January, when Republicans take the majority, according to aides who weren’t authorized to speak publicly on the matter and demanded anonymity.

Some Democrats are on board with that effort, though Obama has threatened to veto any new sanctions threatening the diplomacy.

The midterm elections have others weighing their approaches. The powerful pro-Israel lobby, AIPAC, issued a statement after the last extension urging the U.S. government to “make clear that Iran can expect no further extension of the talks.”

In Israel itself, which has been outspoken in opposition of a deal that it fears could leave it vulnerable to Iran, officials said they believe an extension is the way to go.

A senior Israeli official said Israel supports an extension in the talks’ deadline to allow time for a better deal to be negotiated through additional economic sanctions on Iran.