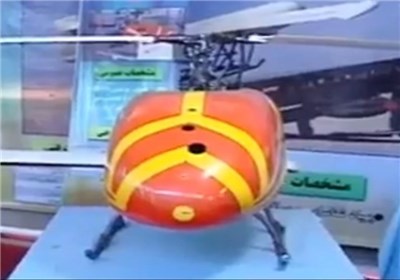 TEHRAN (Tasnim) – A domestically-made unmanned helicopter drone was put on display at an international aviation exhibition in southern Iran on Wednesday.

The indigenous unmanned aerial vehicle (UAV) named “Yasin” was unveiled at the 7th edition of Iran’s International Exhibition of Aviation and Aerospace Industries, held on the Persian Gulf island of Kish.

The aircraft designed and developed by the Iranian experts enjoys various capabilities. The helicopter drone with its 21.5kg weight can carry a payload of 15 kilograms. It can reach altitudes as high as 3,000-feet and has a flight endurance of 1 hour and 10 minutes.

The chopper can be used for various missions, including for taking aerial images as well as surveillance and reconnaissance.

Yasin is the second helicopter drone unveiled in the exhibition. A helicopter named “Nazer” had previously been put on display.