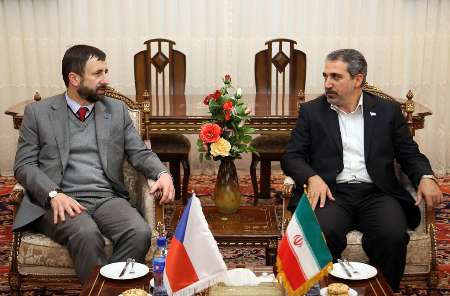 Tabriz, November 18, IRNA – Expanding Tehran-Prague economic ties has ways which can be paved needless of lifting the sanction, said Chargé D’Affaires of the Czech Embassy in Tehran Peter Stephen.

“I hope the Iranian nuclear delegation in Vienna will achieve good results of the Group 5+1 delegates in Vienna in their ongoing talks in Vienna to enable us to resume full political and economic ties with Iran, but we can do so even needless of lifting the sanctions,” he said in a meeting with the deputy governor general of East Azarbaijan province for political and security affairs.

He said that Prague is interested in expansion of comprehensive relations with Iran, not exclusively with Tehran, as there are many industrial poles in Iran, such as East Azarbaijan with which the Czech Republic would like to expand its industrial and economic ties.

“Tabriz has good potentials for manufacturing heavy industrial machines and keeping in mind the Czech Republic’s expertise in that field as of remote past we are interested in cooperation in the field,” he added.

He said that manufacturing train and subway compartments can be attractive for the Czech industrialists, adding that he will try to arrange for a gathering of the Tabrizi and Czech merchants and industrialists.

The deputy governor general of East Azarbaijan province for political and security affairs, too, in the meeting referred to the tourism and industrial potentials of the province as two factors contributing to its development, as well as good basis for cooperation with the Czech Republic.

Saeid Shabestari said that a large number of the provincial residents are employed in industrial units, proposing that the Czech Republic can contribute to the industrial renovation of East Azarbaijan province.