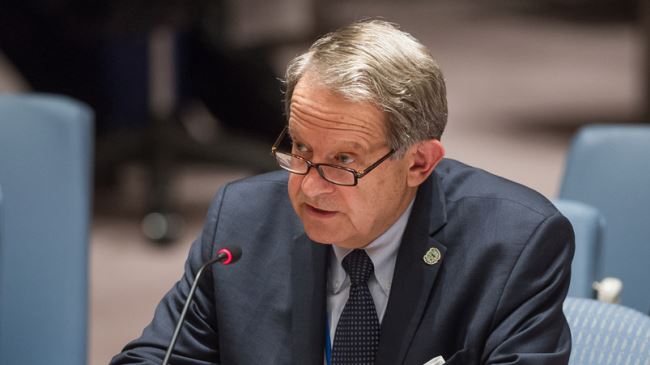 United Nations Security Council has discussed the Israeli regime’s crimes against Palestinians in the occupied West Bank and the besieged Gaza Strip.

Jens Anders Toyberg-Frandzen, the assistant secretary general ad interim for UN political affairs, addressed the Security Council meeting on Monday, saying, “Clashes between Palestinian youths and Israeli security forces” in East al-Quds (Jerusalem) and the occupied West Bank “have been taking place on an almost daily basis, and escalating tensions surrounding access to holy sites have contributed significantly to the spike in violence.”

Enumerating the atrocities committed by the Tel Aviv regime, the UN official said that Israeli police shot and killed a Palestinian youth in the village of Kafr Kanna on November 8.

“On the same day, thousands of people reportedly protested the killing, leading to clashes with police in the village” Toyberg-Frandzen said, adding, “A Palestinian man was reportedly shot to death by Israeli security forces during clashes at a refugee camp” near the West Bank’s southern city of al-Khalil (Hebron) on November 11.

Toyberg-Frandzen further referred to clashes between Palestinian worshippers and Israeli settlers and troops at the al-Aqsa Mosque compound and the removal of restriction for entering the holy site, saying that he “was encouraged by the lifting on 14 November of age restrictions for access to” the al-Aqsa Mosque.

Israeli police spokesman Mickey Rosenfeld said on November 14 that there would be “no age limit” on the entrance of Palestinian worshippers to the al-Aqsa Mosque for the first time “in months.”

The clashes erupted in October after Tel Aviv closed all gates to the compound to Palestinian men under the age of 50 following the attempted murder of Israeli right-wing activist Yehuda Glick by unknown gunmen.

Israel has regularly used age restrictions for Palestinian men to access the site.

The al-Aqsa Mosque compound, located in the Israeli-occupied Old City of al-Quds, is a flashpoint holy Islamic site. The location of the compound, known to Jews as the Temple Mount, is the holiest site in Judaism. The mosque is Islam’s third holiest after Masjid al-Haram in Mecca and Masjid al-Nabawi in Medina, Saudi Arabia.

Toyberg-Frandzen additionally pointed to the Tel Aviv regime’s illegal settlement construction plans, saying, “Such unilateral actions will only further impede the chances for long-term stability and a durable peace and should therefore be reversed.”

More than half a million Israelis live in over 120 settlements, built since Israel’s occupation of the Palestinian territories of the West Bank, including East al-Quds, in 1967.

He also called for the continuation of talks for removing the siege on the Gaza Strip and the construction of the blockaded area.

According to the UN, the Israeli recent onslaught on the blockaded Gaza Strip, which started on July 8 and ended on August 26 with an Egyptian-brokered truce, destroyed thousands of buildings, including the only power plant of the blocked territory, and hit at least 223 schools in Gaza, including the UN-run schools.