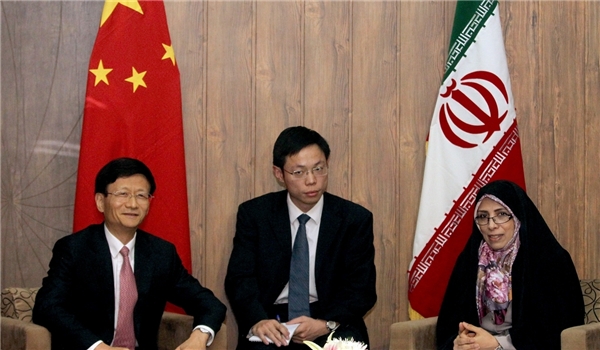 TEHRAN (FNA)- Iranian Vice-President for Legal Affairs Elham Aminzadeh dismissed the human rights allegations against Iran, and said the West’s double-standard approaches are the root cause of these accusations.

“The rule of double-standards in the world is the source of accusations about human rights violation against many states, but if nations’ rights are respected (and the practice of double-standards is stopped), such allegations will never be raised,” Aminzadeh said in a meeting with a high-ranking Chinese official in Tehran on Saturday.

She also referred to the compilation of citizens’ rights charter in Iran, and said, “Based on the charter, people’s rights should be respected in all ministries and everyone should respect its own and others’ rights.”

Aminzadeh also said that in addition to the citizens’ rights charter, the Iranian government has proposed a resolution to the UN on fighting violence and extremism.

On December 18, the UN General Assembly overwhelmingly voted to approve Iranian President Hassan Rouhani’s WAVE proposal, which calls on all nations across the globe to denounce violence and extremism. The Iranian president had made the proposal in his address to the UN Disarmament Conference in New York on September 25, 2013.

In relevant remarks in September, Iranian Foreign Minister Mohammad Javad Zarif lashed out at the western countries for their biased stances against Human Rights conditions in different world countries.

Zarif made the remarks in a meeting with UN High Commissioner for Human Rights Zeid Ra’ad Zeid Al Hussein on the sidelines of the UN General Assembly meeting in New York.

During the meeting, he expressed concern over present human rights situation worldwide, and blasted the double-standard policy in dealing with human rights issue.

He said the so-called advocates of human rights used it as a pressure leverage against other nations.

Zarif said in dealing with the human rights issue, “it is essential to pay due attention to the culture of different nations.”