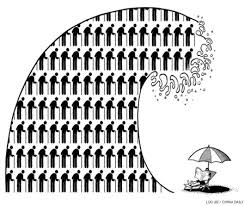 Tehran, Nov 16, IRNA – Iran must reach a population growth rate of 2.1 percent to tackle risks associated with an aging population such as heavy financial burden of diseases and lack of young workforce, said Dr. Khalil Ali Mohammad-Zadeh, a member of the Community of Physicians in Iran’s Basij (volunteer) Force.

“Iran is among the top three aging countries at present,” Sunday’s edition of ‘Iran Daily’ quoted him as saying.

“While people under the age of 15 account for 40 percent of population in developing countries, only 23 percent of Iran’s population are under 15 years.”

Mohammad-Zadeh warned about the rapid population decline in Iran and said if the current rate of population growth were to continue, Iran would become an aging country by 2046.

“The average rate of population growth stands at 1.29 percent at present,” he said.

The official said each family should have two children on average to reverse the negative population growth.

Mohammad-Zadeh, however, said urging families to have more children must not cause women to stay home.

“Women must not be forced to abandon their social roles and only take care of children because they are well-educated and their contribution is needed for the development of the country,” he said.

Mohammad-Zadeh said workplaces could introduce part-time jobs to women employees to help them spend more time with their children.

Criticizing the high rate of C-section in Iran, which could adversely affect population growth, Mohammad-Zadeh said about 56 percent of Iranian women give birth through C-section, ranking Iran second in the world after Brazil.

“Iran has registered the highest C-section rate in certain months of the year, which must decline by about 10 percent annually to reach the global standard of 11 percent,” he said.