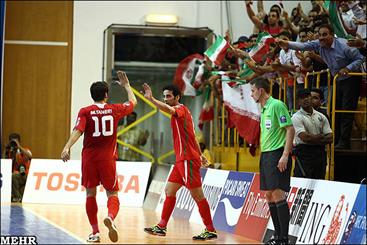 Iran national futsal team faced Costa Rica in the second round of the group stage matches of the tournament on Friday, and finally scored a resounding victory (5-1) against its opponant. Hossein Tayyebi, Ahmad Ismailpour and Ali Asghar Hassanzadeh scored Iran’s goals.

This victory was achieved while the first half ended with both teams drew one-one. With this victory, Iran retained its top position in the group with six points and reached semi-finals and Guatemala stood in second place after Iran.

In the semifinals of the competitions, Iran national futsal team will face the second team in first group, Columbia, on Saturday while Guatemala will compete against the Brazilian team.