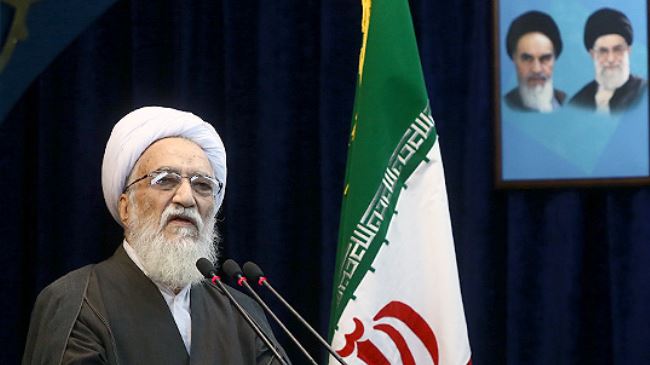 US must show goodwill in action: Iran cleric

A senior Iranian cleric says the US must show goodwill with regard to Islamic Republic in action rather than through sending letters to Iranian officials.

“[US President Barack] Obama must show his goodwill in practice instead of through sending letters [to Iranian officials]. No sooner had he sent his letter [to Leader of the Islamic of Revolution Ayatollah Seyyed Ali Khamenei] than he extended the Emergency Act regarding Iran,” Ayatollah Mohammad Ali Movahhedi Kermani told Friday Prayers worshippers in the Iranian capital city of Tehran.

He made the comments in reference to Obama’s recent decision to extend the so-called National Emergency Act with respect to Iran that keeps sanctions against the Islamic Republic in place for at least another year.

On November 6, it was reported that Obama had sent a letter to Ayatollah Khamenei last month about possible cooperation in the fight against the ISIL terrorist group.

“A US weekly has recently stated that US cannot stand against ISIL without Iran’s help and thus is in need of Iran,” the senior Iranian cleric added.
Earlier in the week, a senior Iranian official similarly lashed out at what he called the hypocrisy of members of the US administration regarding their secret correspondence and declared positions, describing such practice as a scheme to influence the US public opinion.

“Unfortunately, Washington’s policies in the Middle East are being regulated by Israel, and the Tel Aviv regime, in return, has spared no efforts in humiliating the United States,” Secretary of Iran’s Supreme National Security Council Ali Shamkhani said on Wednesday.

Ayatollah Khamenei has also said that efforts by the US and its allies against ISIL are not genuine and that groups like ISIL and al-Qaeda were created to confront Iran and deal with the wave of Islamic Awakening in the Middle East and Africa.