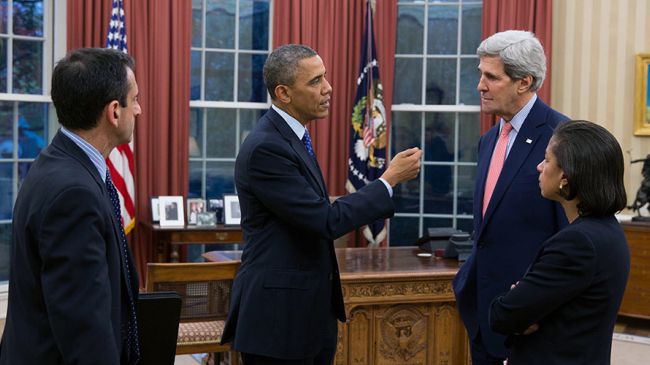 President Barack Obama has asked his national security team to review US strategy toward Syria .

President Barack Obama has asked his national security team to review US strategy toward Syria after concluding that the ISIL terrorist group may not be defeated with Bashar al-Assad in power, officials say.

Over the past week, the White House has convened four meetings of Obama’s national security team, which according to a senior official, were “driven to a large degree how our Syria strategy fits into our ISIS (ISIL) strategy,” CNN reports.

Obama’s long-contemplated strategy toward ISIL has come under sharp criticism as it has failed to halt the advance of terrorists in Iraq and Syria. The review is seen as a tacit admission that the strategy is not working.

“The president has asked us to look again at how this fits together,” a senior US official told CNN on condition of anonymity. “The long-running Syria problem is now compounded by the reality that to genuinely defeat ISIL, we need not only a defeat in Iraq but a defeat in Syria.”

Ben Rhodes, the deputy national security adviser, denied a formal strategy review but said Obama has joined with his national security team to discuss “what we’re targeting in Syria” and how “we’re supporting opposition and building them up as a counterweight to ISIL but also ultimately of course to the Assad regime.”

National Security Council spokesperson Alistair Baskey said Wednesday that “Assad has been the biggest magnet for extremism in Syria.” He emphasized that President Obama has made clear that “Assad has lost all legitimacy to govern.”

In a blunt memo to National Security Adviser Susan Rice last month, Defense Secretary Chuck Hagel warned that the Obama administration’s goal of ousting Assad was being undercut by its current military offensive against ISIL. The memo further said that the White House had no clear end game for the conflict.

The US launched airstrikes against ISIL targets in Iraq in August. A US-led coalition also began its military campaign against the group in Syria in late September.

In addition, the Pentagon plans to train and arm 5,000 “moderate” militants a year in Syria to battle both the government and the ISIL group.

A senior US official, however, told CNN that “it’s been clear for some time that supporting the moderate opposition in the hopes of toppling Assad, isn’t going to work.”

The ISIL terrorists– some of whom were amongst militants initially trained by the CIA in Jordan in 2012 to destabilize the Syrian government– now control large parts of Syria and Iraq.