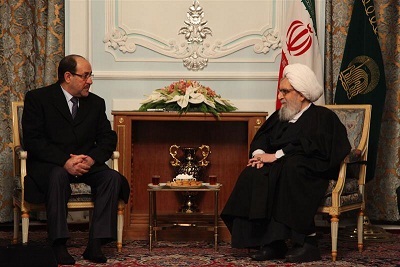 Maliki: US pursuing new plots in Iraq under ISIS disguise

Mashhad, November 13, IRNA – Visiting Iraqi vice president here Wednesday referred to futile US efforts to remain military presence in Iraq and their entry under disguise as ISIS just when the Iraqis were entering the reconstruction era of their country.

Vice President Nouri Al Maliki made the comment in a meeting with the Guardian of Imam Reza’s Holy Shrine Ayatollah Abbas Va’ez-Tabasi, adding that the main objective of the new plot is intriguing a wide-scale dispute between the Shi’a and Sunni Muslims in the region.

“The Americans began this sedition in Syria and then expanded its dimensions into Iraq and it seems as if they intend to further infiltrate it into other countries in their future plans,” he said.

Maliki stressed that Iran, Iraq and Lebanon should not let the Syrian government to be overthrown, since the falling of the Damascus government will equal the beginning of numerous problems for the entire regional countries.
“The Americans intended to maintain a huge number of their military forces in Iraqi soil but we evacuated them from our country and we were resolutely wishing to keep our motherland free from their interventions,” he said.

Maliki said that the Americans were not pleased with leaving Iraq and the evacuation of their forces from there was a huge loss for them.

“Even countries like Germany, Korea and Japan asked us how we managed to urge the Americans to leave Iraq, while they have not managed to do so 60 years after the end of the war in their countries,” he said.

The Guardian of Imam Reza’s Holy Shrine, too, praised the anti-colonialist stand of Iraq during Mr. Al Maliki’s premiership in Iraq.

“It should be kept in mind though that the evacuation of the US armed forces does not always mean their exit from a country as sometimes their agents in some sensitive posts can very well pursue their objectives and inflict losses at sensitive times” he said.

“We were very worried about the conditions in Iraq, but you, with your brave move in transferring the responsibilities to the other ended the worries and increased the hopes of the Iraqis,” he added.