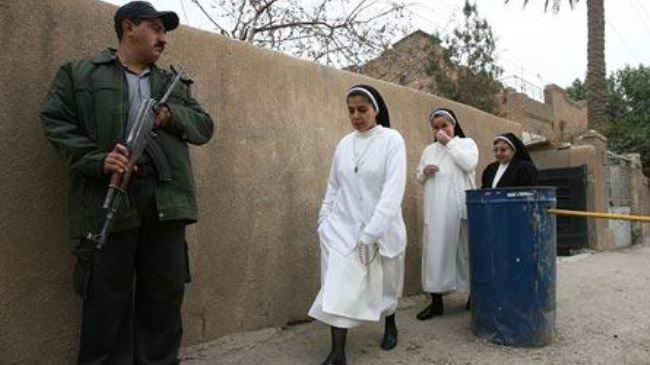 On Wednesday, Kurdish Peshmerga forces gave the control of town of Bakufa, 30 kilometers (19 miles) north of Mosul, to the Christians after pushing out the Takfiris.

“We, the Peshmerga, came here from Erbil to protect our Christian brothers and their homes. There is constant cooperation and assistance from both sides,” said Abdul Rahman Kawriny, a Peshmerga commander.

Members of the Christian militia group then replaced the ISIL flag with their own at the entrance of the town.

The group, called Dwekh Nawsha, was formed recently by the Assyrian Patriotic Party, in order to “protect Christian territories in Nineveh province, particularly the northern part of Nineveh,” said Albert Kisso, the leader of the group.

“We are patrolling day and night. We move around these areas and observe the situation,” noted the 47-year-old member of the Iraqi Assyrian Patriotic Party, adding that the group also took measures to protect monasteries, churches, and artifacts there “because this is the beauty of the Mesopotamian civilization.”

There is a large Christian community with an estimated 120,000 members in Bakufa and the 22 villages nearby.

The recently-formed group only has 70 active members, most of whom are local residents inexperienced in warfare.

“I only have little bit of experience, but we have faith and in my opinion faith is greater than military experience,” Kisso said.

A 200-year-old Christian monastery is situated in the center of Bakufa.