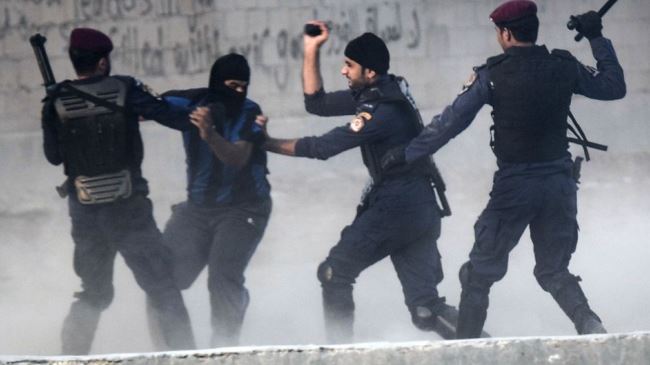 Anti-regime protests continue in Bahrain as people take to the streets in various parts of the Persian Gulf kingdom.

Violence broke out on Wednesday as Bahraini security forces clashed with protesters during the largest rally that took place in the northwestern .

According to reports, people also protested the regime’s policies in the al-Shakhoura and Sufala villages.

The protesters called for the ousting of the Al Khalifah regime and demanded a referendum be held on the country’s political future.

Since mid-February 2011, thousands of protesters have held numerous demonstrations in the streets of Bahrain, calling on the Al Khalifa royal family to relinquish power.

In March 2011, troops from Saudi Arabia and the United Arab Emirates were deployed to Bahrain to help Manama quash the anti-regime protests.

Scores of Bahrainis have been killed and hundreds of others injured and arrested in the ongoing crackdown on peaceful demonstrations.

Bahrain has been criticized by human rights groups for its harsh crackdown on anti-government protesters since the country’s uprising began in February 2011.

In June, the Office of the United Nations High Commissioner for Human Rights censured the Manama regime for human rights violations. A total of 46 members of the international body expressed deep concern over the Al Khalifa regime’s crackdown on peaceful protesters.