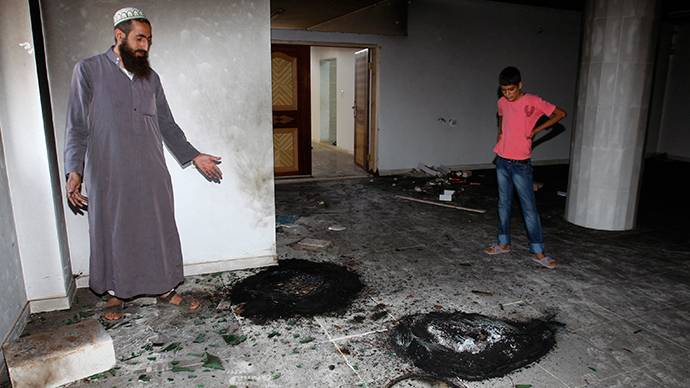 Israeli settlers have overnight set on fire a mosque near the West Bank town of Ramallah, according to Palestinian security officials.

“The settlers set fire to the whole of the first floor of the mosque” in the village of Al-Mughayir, near the Shilo Jewish settlement, the officials said, as cited by AFP.

A group of Palestinian worshippers who came to the mosque for their morning prayer found the building in flames, Ma’an news agency reports, as cited by the Jerusalem Post.

The worshippers reportedly managed to extinguish the fire. The first floor of the mosque has been severely damaged.

Another mosque was torched in the same village two years ago.

The arson attacks by hardline Jewish settlers are often accompanied by a graffiti reading “price tag,” but this was not the case in the latest incident, according to AFP citing Palestinian officials.

Tensions have lately been high between the Israelis and the Palestinians over disrupted access to another place of worship – the landmark Al-Aqsa mosque in Jerusalem.

Palestinian leader Mahmoud Abbas has warned Israeli to stay away from Al-Aqsa and said has accused Israel of “leading the region and the world to a destructive religious war.”

On Tuesday, a Palestinian man was shot dead by the Israel Defense Forces in the West Bank, trying to disperse a rioting Palestinian crowd.

On Monday, an Israeli woman and an IDF soldier were stabbed, allegedly by Palestinians, in two separate attacks.