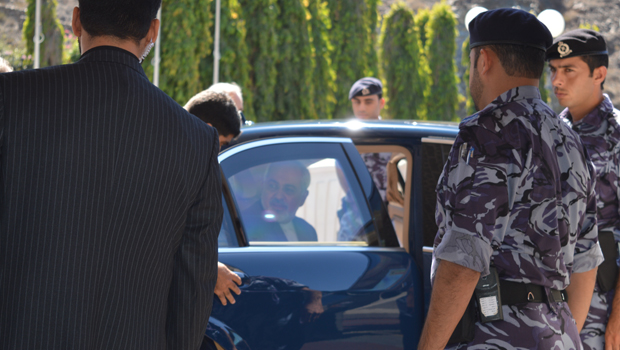 “You’ll just have to wait,” says Zarif about nuclear agreement

Muscat: “You’ll just have to wait for next week,” said Iran’s Foreign Minister Javad Zarif, in response to a question about the progress of the nuclear negotiations currently taking place in Muscat.

Zarif was on his way to a meeting with Sayyid Fahd bin Mahmoud Al Said, Deputy Prime Minister for the Council of Ministers, when reporters approached him as he was walking out of Al Bustan Palace Hotel, where meetings on the Iranian nuclear program have been taking place this week.

On Sunday and Monday there were ongoing trilateral meetings between Zarif, US Secretary of State John Kerry, and European Union special representative Catherine Ashton. While Kerry, giving a thumbs up to reporters, left Muscat late last night to attend meetings in Beijing and brief Barack Obama on the talks, Ashton and Zarif are still in forging ahead with the discussions with Representatives of the United Nations Security Council’s five permanent members – Russia, China, France, Britain, the US – and Germany, a group referred to as the P5+1.

The meetings are all part of the 9th round of negotiations aimed at finding a treaty to limit Iran’s nuclear program in exchange for a lifting of sanctions imposed on Iran by the US and its allies.

Following the first two days of talks in Oman, Iran’s deputy foreign minister Abbas Araghchi, told the Islamic Republic News Agency that “after hours of talks we are still not in a position to say we have made progress and we cannot say that we have regressed.”

Meanwhile, there is heavy speculation in Muscat that John Kerry will return to continue the talks in Oman in a couple of days. There is pressure on all parties to come to find a solution since the current interim agreement expires on November 24. More talks are scheduled to take place in Geneva on November 18, ahead of the deadline.

By Times of Oman