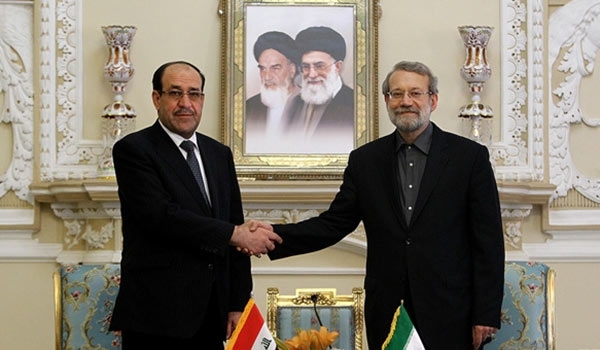 TEHRAN (FNA)- Iranian Parliament Speaker Ali Larijani questioned the seriousness and honesty of the so-called international coalition against the ISIL, reminding that the coalition members are the creators and supporters of the ISIL and other terrorist groups in the region.

“The terrorist and inhumane activities of the group know no borders and mere airstrikes (by the US-led coalition) cannot purge the region from the ISIL forces,” Larijani said in a meeting with Iraqi Vice-President Nour al-Maliki in Tehran on Monday.

“Establishment of security and stability across Iraqi territories is important for all the neighboring countries from the regional point of view and Iran has spared no effort in this respect,” Larijani further added.

The top Iranian lawmaker praised the Iraqi nation’s resistance against the ISIL and expressed optimism that calm and peace would soon be restored to Iraq.

Maliki, for his part, lauded Iran as a great country and a friend of Iraq at different junctures in the post-Saddam era, noting that all Iraqis consider Iran as a real ally during difficult times and crises.

He noted that the Iraqi nation’s campaign will soon put an end to the terrorist actions of the ISIL, which indiscriminately targets all ethnicities in the country.

In September, Iran’s Deputy Defense Minister Brigadier General Amir Hatami underlined that the US-led coalition formed against the ISIL was a political showoff, and said launching airstrikes against the ISIL positions in Iraq was ineffective.

He noted that the West has equipped the ISIL against Syria and Iraq and now they want to confront it.