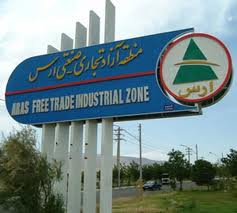 TEHRAN, Nov. 11 (MNA) – Managing Director of Iran-Armenia Friendship Association emphasized the need for expansion of ties between Iran and Armenia and described Aras as ‘golden opportunity’ for Iran and neighboring countries.

On the fourth meeting of Foreign Media Tour in Aras Free Zone, Seyed Mohammadreza Damavandi described Aras as a rare opportunity for business development, adding that this zone, despite pure economic benefits, was a golden opportunity for Iran and neighboring countries.

Pointing out that the Armenian authorities have plans in order to set up a free trade zone in Iran-Armenia border, Damavandi said the launch of this economic area could help strengthening ties between the two countries through Aras and Armenian free zones.

In this meeting, managing director of Iran-Armenia Friendship Association said Aras would turn into an important economic hub in the region within the next decade, adding that there were great capacity and potentials in the area to be used.

Volodia Arushanyan pointed to the numerous resources in the area and called it as an important step toward the development of multilateral ties between Iran and Armenia. “Armenians are interested in visiting their historical and religious monuments in foreign countries”, he added.