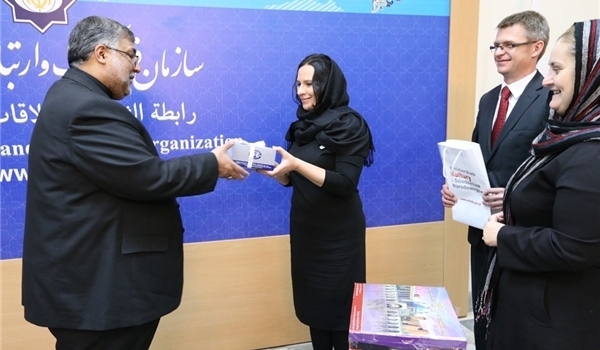 TEHRAN (FNA)- Iranian and Polish officials in a meeting in Tehran on Monday underlined the need for the further expansion of cultural ties between the two countries.

During the meeting, Ebrahimi Torkman pointed to the status quo of Iran-Poland relations, and said, “Iran and Poland have good cooperation in different cultural areas and I hope that the visit of the Polish culture minister to Iran will further broaden these relations.”

He reiterated that the great capacities of Poland provide Iran with the opportunity to have cooperation with that country in cultural areas.

Smullen, for her part, said that the Polish people are willing to find out about Iran’s culture.

“I submitted the cultural cooperation pacts that have been endorsed by the Polish government to Iran’s foreign ministry and I hope that they will be signed soon after undergoing the necessary studies,” she said.

Tehran hosted a conference on Sunday to mark the 540th Anniversary of Iran-Poland Diplomatic Relations.

The event was held by the foreign ministry in cooperation with the Polish Embassy in Tehran.

Iranian Culture and Islamic Guidance Minister Ali Jannati, Polish deputy culture and national heritage minister, a number of Iranian and Polish researchers addressed the meeting about various topics such as history of Iran-Poland ties, Iran-Poland ties in era of globalization, scientific, cultural and artistic cooperation and commercial and economic opportunities in Iran and Poland.

Meanwhile, an exhibition of historical documents featuring Iran-Poland bilateral ties since the Safavid era as well as relevant books was underway on the sidelines of the conference.