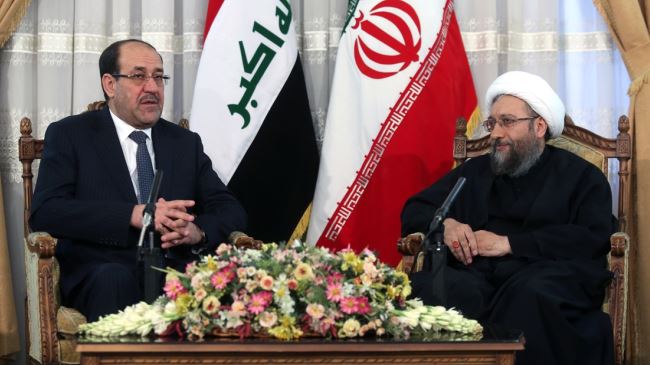 Iran’s Judiciary Chief Ayatollah Sadeq Amoli Larijani says Iraq has the necessary potentials for development, warning that foreign plots against the country are aimed at hindering its stability and progress.

In a meeting with Iraq’s Vice President Nouri al-Maliki in Tehran on Monday, Amoli Larijani added that terrorist groups such as ISIL have been formed in Iraq to obstruct the Muslim country’s development.

He expressed hope that the Iraqi army and popular forces would succeed in fully defeating terrorists and Iraq would move toward progress as a prominent and independent country in the Middle East and the world.

The Iraqi veep, for his part, said the two sides are opening a new chapter in mutual relations based on good neighborliness and unity.

Maliki added that the Middle East presently needs concentrated efforts by all Muslim nations with the purpose of maintaining regional unity and stability.

The ISIL terrorists currently control large areas of Iraq. The group sent its militants into Iraq in June, seizing large swathes of land straddling the border between Syria and Iraq.

The ISIL militants have been carrying out horrific acts of violence, including public decapitations, against Iraqi communities such as Shias, Sunnis, Kurds, and Christians.

The Iraqi army has managed to make a number of gains in the fight against the ISIL militants in recent weeks.