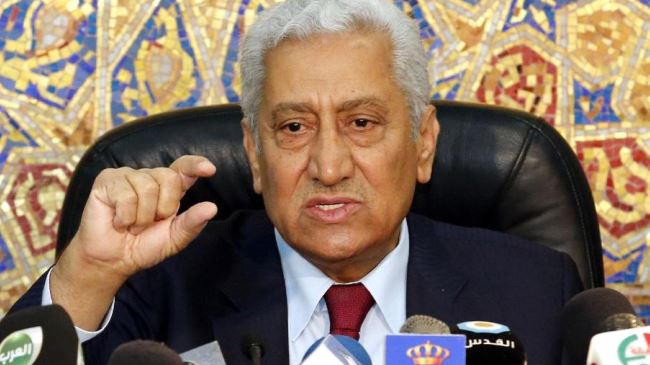 Jordanian Prime Minister Abdullah Nsur speaks during a press conference in the capital, Amman, on November 9, 2014, after the government’s decision to recall its ambassador to Israel.

The Jordanian prime minister has warned that the ongoing tension over the flashpoint Al-Aqsa Mosque compound in East al-Quds (Jerusalem) is inflicting a “stab wound” on the peace treaty between Jordan and Israel.

“Israel and Jordan are committed to peace and to respect the peace treaty, but this commitment is not just applicable to one side, it is a commitment by both,” Abdullah Nsur told reporters on Sunday in the capital, Amman.

Last week, heavy clashes erupted at the mosque compound between Israeli forces and Palestinian protesters, prompting Jordan to recall its ambassador to Tel Aviv in protest.

“What is happening is a stab wound to the idea of peace,” the Jordanian premier said, adding that Israel’s actions at the site are the result of a “clear” policy designed to change the decades-long status quo at the holy site.

Last week, Jordanian Ambassador to the United Nations Dina Kawar sent a letter to the president of the UN Security Council, slamming Tel Aviv’s “outrageous actions” against the al-Aqsa Mosque.

Jordan is Israel’s second ally in the Arab world after Egypt. Amman signed a peace treaty with Tel Aviv in 1994 that made Jordan the custodian of Muslim holy sites in East al-Quds.

Tensions have been running high at the al-Aqsa Mosque compound over the past few weeks.

Palestinians are extremely angry at Tel Aviv’s raids as well as its new restrictions on the access of Palestinians to the mosque, considering the move as part of the Israeli regime’s plan to Judaize and desecrate the Islamic holy site.