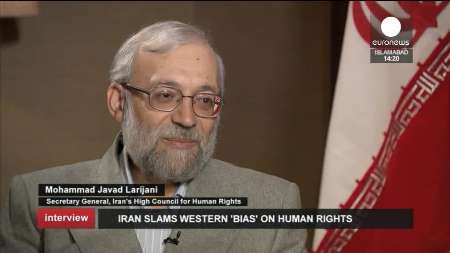 In an interview with Euronews correspondent James Franey in Geneva, he slammed the West’s ‘double standard policy’ on human rights.

He said: “I think Iran right now is targeted, is falling victim to a new kind of terrorism. I call it media and political terrorism. In the [UN Human Rights] Council, if you look at the number of people who talked about Iran, more than 100 states expressed their views about Iran. Around 50 states, which are the United States and Europeans mostly, criticized Iran. The rest, which are over 70, were very sympathetic to Iran.”

“For us, the world is not the United States, Britain and France. We consider it globally. Yes, these people make a lot of fuss and they are the flag bearers of human rights. But the record of the United States is very dismal,” he added.

He maitained: “The governments which are criticizing us, it is quite apparent that there is a quite politically structured criticism here; politically manipulated.”

Larijani went on to say “There is the second point in the criticism against us. And this is overlooking differences. Our experience in the last 35 years is to create a political and civil structure based on Islamic rationality, which is democratic, but it is not liberal, it is not secular.”

As for the number of executions in Iran, he said “I think if we change the law on narcotics, 80 percent of our executions will be dropped. This is a first, pragmatic stage for bringing down the executions.”

Turning to the nuclear talks with the G5+1, he said he was “optimistic because I am aware that the Western community is coming to the conclusion that Iran should be considered one of the most capable countries in nuclear technology. And Iran is implementing its obligations. If these two are acknowledged to any extent, I think we will reach some agreement… but proportional to that extent.”

Reacting to the US and Israel accusations that Iran wants to build a bomb, he said: “I think that the right politicians, the right-wing politicians, should go and see a psychiatrist. I mean something is wrong with [their] mental status. The world is not moving in the direction that they would like. We are very much a strong country in the world and they cannot change it in the way they like.