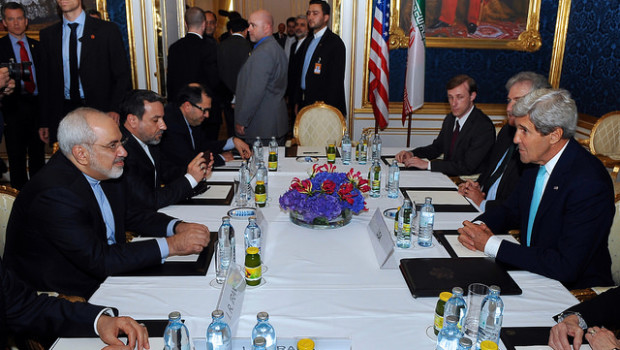 Secretary of State John Kerry has a hectic traveling schedule, and this month’s itinerary has been particularly focused on doing everything to ensure a good deal with Iran over its nuclear program is achieved by the deadline of November 24. A series of meetings between Kerry and some members of the P5+1 (France, Germany, UK, China, Russia, US) give us an idea of the extent of the last minute scrambling occurring behind the scenes to ensure all bases are covered prior to the official resumption of talks in Vienna on November 18.

Kerry met with French Foreign Minister Laurent Fabius in Paris on Nov. 5 for a number of reasons, including answering France’s questions about the “framework” the US has presented to the Iranians in order “to meet their peaceful energy needs.” Two days earlier, this document was alluded to by President Obama in a news conference, and could be centered on an Iran-Russia deal, but there has been no confirmation of the details. While Kerry also likely asked for Fabius’ help in suspending or lifting (in due time) European sanctions against Iran, his main purpose for the meeting was to ensure that the French minister would not repeat his public tantrum from around this time last year when Fabius declared that the draft provisional agreement negotiated between the US and Iran in Geneva—and discovered at the last moment by other members of the P5+1—was some kind of a “sucker’s deal.” This time Kerry is taking no risks and Fabius is being kept carefully abreast of the latest developments between Washington and Tehran.

Meanwhile, Catherine Ashton, the EU foreign policy chief, met in Vienna Nov. 7 with the P5+1’s political directors. Again, the main purpose of the meeting was clearly aimed at making sure that everybody is informed and agrees with the recent turn of events.

Today, John Kerry and Russian Foreign Minister Sergei Lavrov had a bilateral meeting in Beijing on the sidelines of the Asia-Pacific Economic Cooperation (APEC) forum. Kerry was probably keen to verify, one last time, that Russia is ready to accept on its soil the bulk of the low-enriched uranium (LEU) produced by the Iranians to reprocess it into nuclear fuel elements for Iran’s Bushehr plant. This operation would extend the “breakout time” necessary for the Iranians to accumulate the quantity of highly enriched uranium necessary for a bomb, and therefore make an Iranian enrichment program with a few thousand centrifuges more acceptable to the American Congress and the Israeli government. Kerry is well aware that Russia’s full collaboration on this point is essential for the completion of an agreement and wants no last minute surprises.

Thus protected on his flanks by these two sessions, Kerry will meet his Iranian counterpart, Mohammad Javad Zarif, in the company of Ashton, for two days in Oman, which hosted the initial US-Iran meetings that got us to this point, from Nov 9-10. This meeting will be aimed at narrowing the parameters of the Joint Comprehensive Plan of Action, the official name of the final agreement.

Following Lavrov’s guarantee on the removal and processing of Iranian LEU, the number of authorized operating Iranian centrifuges should not be a major sticking point anymore. But one last big hurdle remains: the timetable for the suspension and lifting of sanctions. After his conversation with Fabius, and with the support of Ashton, Kerry is likely to confirm Europe’s readiness to lift or suspend a significant amount of its own sanctions at an early stage. As for the American sanctions, it must not have been difficult for him to convince his interlocutor that the only realistic solution is to strike a deal that would not need the formal approval of Congress. President Obama would then act through executive orders and, when necessary, waive Congress-approved sanctions as long as he is in office, leaving to his successor the responsibility of asking Congress to remove them for good. Kerry could also make the credible argument that—if the agreement was faithfully followed by both sides for the remainder of Obama’s term—it would be practically impossible for any future president and Congress to destroy the positive results that would have been achieved.

Following the trilateral meeting, a session at the political directors’ level will also occur in the friendly Sultanate of Oman, on Nov. 10. It will likely be devoted to drawing the conclusions of the just-completed ministerial session, and putting together all the elements of the final agreement. After a lapse of about a week, allowing for consultations in the capitals and the informing of the most interested observers (the International Atomic Energy Agency, the UN secretariat, Saudi Arabia, Israel…) Iran and the P5+1 are scheduled to meet in Vienna on Nov. 18 for a marathon round just one week before the deadline for a final deal. This should be enough time to iron out the last details of the Joint Comprehensive Plan of Action, and call upon the seven Foreign Ministers representing the parties to the agreement, as well as Catherine Ashton as the EU’s representative, to proceed together to the signing ceremony.

This article was written by  François Nicoullaud  for LobeLog on November 9th, 2014. François Nicoullaud’s diplomatic career (1964 to 2005) brought him to New York, Chile, Berlin, Bombay, and finally to Budapest and Tehran as French ambassador.