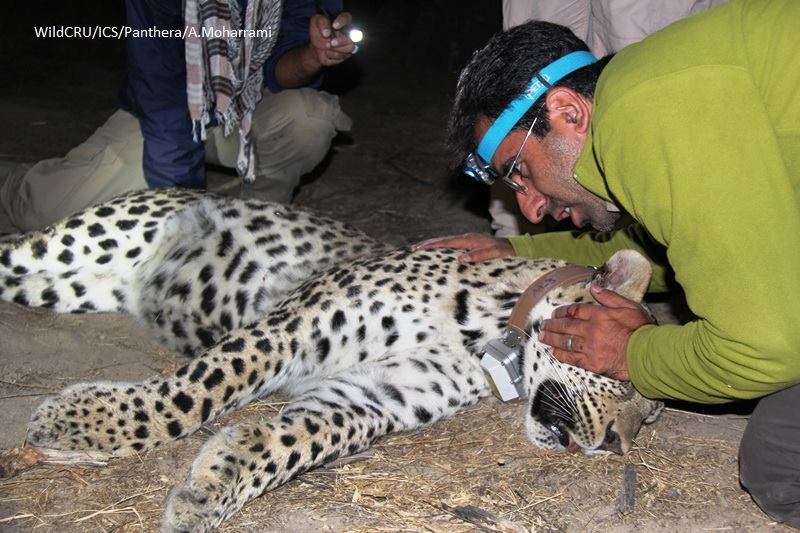 Two Persian leopards have been fitted with GPS tracking neckbands

GPS tracking neckbands help Iranian animal experts get a better understanding of Persian leopards in mountainous regions of the country.

The news website of Iran Environment and Wildlife Watch has posted a report on a research project aimed at collecting information about mature male leopards in Tandooreh National Park in the northeastern province of Khorasan Razavi. The following is the translation of part of the report:

The research project – the doctoral thesis in zoology of Mohammad Sadegh Farhadinia – got underway last year. Ever since Dr. Iman Memarian, a veterinarian, and his assistant Alireza Shahrdari-Panah, Arash Moharrami, a project assistant and Nima Asgari, a cameraman and a documentarian have been working on it. In the early stages of the project, Hooman Jokar, an expert in setting animal traps, helped the research team as well.

“Leopards are as one of the most widely-studied mammals in the world. However, in mountain areas of West Asia there is still a lot about them to be explored. It is almost impossible to study Persian leopards in mountainous regions of Iran without modern, specialized equipment,” said Farhadinia.

“Among other things, GPS tracking neckbands are of great importance because they allow us to record and analyze the movements of leopards as well as the temperature and its relation with the extent of the animals’ physical activity. Such information enables us to accurately calculate the number of calories the leopards need to survive,” he added.

“The project is designed to size up the health of the leopards, the amount of energy they need and should gain on a daily basis, and the vastness of the territory they require to meet their needs.” – Mohammad Sadegh Farhadinia

“Apart from the Protection of Asian Cheetah Project carried out in Bafgh, [a city in Yazd Province], in 2007, this project is unprecedented in Iran. In other words, there may be some problems ahead in terms of applying the six GPS tracking neckbands we plan to fit the animals with. There is no need to point out that we already went through a lot placing orders for the tracking devices because of restrictions caused by sanctions,” he further said.

Farhadinia went on to say, “The project is designed to size up the health of the leopards, the amount of energy they need and should gain on a daily basis, and the vastness of the territory they require to meet their needs.”

As for the GPS tracking neckbands, he stated, “By global standards, the neckbands should be no heavier than three percent of the animal’s total weight to prevent any disorder in behavior or interference in the movement of the animal. After comprehensive studies and extensive correspondence with the neckband-producing firm, fortunately, the weight of neckbands used in this project does not go beyond one percent of the total weight of leopards and batteries on them can last for over a year.”

“GPS attached to the neckbands switches on between eight and 24 times a day and records the location of leopards. The process does not involve any noise and lasts only for a short time. Another interesting feature of such neckbands is that one year after they are fastened they automatically come off the animal’s neck. Thus, there is no need to capture the animal alive and give it an anesthetic to have the neckband removed,” said Farhadinia.

He concluded, “The two leopards studied in the project are doing well, roaming across their territory.”

By Iran Environment and Wildlife Watch, translated by IFP