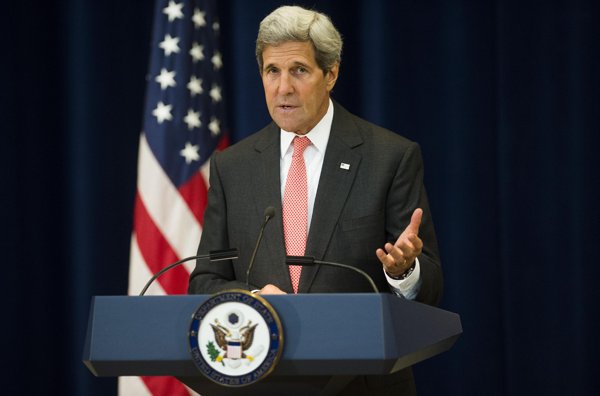 (Reuters) – Reaching a nuclear deal between Iran and six world powers will be more difficult if negotiations drag beyond a November 24 deadline, U.S. Secretary of State John Kerry said on Wednesday.

Kerry, speaking ahead of his planned weekend talks with Iran’s foreign minister, said the United States and its allies were not – for now – weighing an extension of the negotiations.

“I think it gets more complicated if you can’t” meet the deadline, Kerry said, adding “it’s not impossible.”

Negotiators are racing to complete an agreement that would curb Iran’s nuclear program – which Western powers say they fear is aimed at producing nuclear weapons – in return for gradual lifting of economic sanctions.

Kerry’s remarks seemed aimed in part at raising the pressure on Tehran to agree to the deal, which would see limits on its enrichment of uranium and inspections to verify Iran is complying with the agreement’s terms.

Iran says it nuclear program is solely for peaceful purposes.

“We have no intention at this point of talking about an extension, and we’re not contemplating an extension,” said Kerry.

The U.S. secretary of state, who met earlier with French Foreign Minister Laurent Fabius, spoke in Paris a day after U.S. mid-term elections handed control of the U.S. Senate to the Republican Party.

Many Republicans, along with some U.S. lawmakers from President Barack Obama’sDemocratic party, say they fear Obama will acquiesce to a weak agreement with Iran. The U.S. Congress would have to approve any permanent lifting of American sanctions on Iran, although Obama has the power in some cases to suspend sanctions.

Kerry predicted the change in Senate control would not affect the Iran nuclear talks.

“What is complicated is managing internal expectations in other places,” he said. He was not more specific, but appeared to refer to U.S. allies such as Israel and Saudi Arabia, which remain extremely wary of any deal with Iran.

Kerry is due to meet in Muscat, Oman on November 9 with Iranian Foreign Minister Mohammed Jawad Zarif and Catherine Ashton, who recently completed her term as the EU’s foreign policy chief.

Those high-level talks are due to be followed on November 11 by technical negotiations between Iran and the six outside powers: China, Russia, the United States, France, Britain and Germany.

Kerry said he could foresee an extension of the talks “if we were inches away” from an agreement, with only details to be filled.