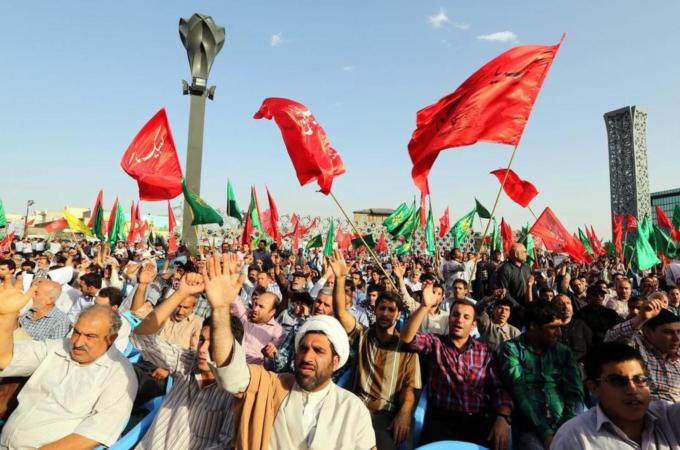 Iran is set to reclaim its role as regional leader

Iranians take part in a demonstration against ISIL in Tehran [EPA]

Once US troops go home, Iran has the most battle-ready military force to offset regional challenges.

Most commentary on the Islamic State of Iraq and the Levant (ISIL) point to the challenges it presents to the Middle East. Sectarian tensions may have been a fact of life in the region. But ISIL has made it the number one threat to the political order – it cost Iraq’s Prime Minister Nouri al-Maliki his job.

The implications of the scourge of sectarianism are far reaching for Iran too. As a constitutionally Shia Muslim state, Iran is mindful of the restricting framework of sectarianism. Since its inception, the Islamic Republic of Iran has been eager to project an image that transcends sectarian differences. This has been a key pillar of Iran’s regional policy. Speaking to the Muslim masses and voicing popular angst against the Israeli occupation of Palestinian lands, or against US arrogance and political domination of the international order, have been at the heart of Iran’s message to its neighbourhood. Of course, this has antagonised neighbouring regimes, which accuse Tehran of destabilising the region.

Saudi Arabia was quite vocal in protesting against Iran’s message following the 1979 revolution. But Tehran turned such criticism to its advantage. By supporting Hamas and Hezbollah in an apparent attempt to challenge Israel, which it calls the “Zionist entity”, by proxy it gained political credibility on the Arab street. Having Hamas in this alliance was very important, as it offered Iran an example of an inter-sectarian alliance against a common enemy.

The notion of the “axis of resistance” applied to the political congruity of Iran, Syria, Hezbollah and Hamas, was celebrated in Iran as a successful case of its trans-sectarian policy, emphasising the political unity of all Muslims. Iran clearly saw itself as the champion of all Muslims and with the sprouting Arab Spring, the Iranian leadership was self-congratulatory for providing a model for the Muslim world to follow, even though the Muslim Brotherhood of Egypt appeared very reluctant to follow the Iranian model.

But the Arab Spring has now turned to winter and given rise to devastating carnage in Syria and Iraq. ISIL has galvanised the international community to act. The US-led aerial bombardment of ISIL assets have offered the Kurdish Peshmerga and the Iraqi forces some reprieve.

Ironically, the common threat of ISIL has put old foes on the same side of the fence. Iran and the US have an enemy in ISIL. So why is Iran not part of the international coalition?

The Iranian leadership operates in its own political and psychological sphere, and responds to a range of factors beyond the geo-strategic needs of the day. The parameters of this sphere dictate that Iran cannot afford to be seen as a minor player in a US-led operation. Iran sees itself as an equal player, and in many ways a more critical player because of its geographical location. While this does not rule out ad hoc contact between the two sides on practical issues, it does make entering into a military alliance with the US highly problematic for Iran’s sense of its own regional role.

The Iranian leadership is also suspicious of US intentions and sincerity in the fight against ISIL. The US is accused of sponsoring rebel groups in Syria, and having a hand in the emergence of what Iran calls “takfiris” (apostate groups). A recent statement by US Secretary of State John Kerry about the role of Saudi Arabia, UAE and Turkey in the rise of ISIL seemed to vindicate Iranian cynicism. Saudi Arabia is now part of the international coalition to stop the ISIL land grab. The Iranian authorities, especially the conservatives, see this as disingenuous. Indeed, Washington’s continued commitment to deposing Bashar al-Assad in Syria, which is at war with ISIL, is seen as evidence of its deceit.

Instead, Iran sees its ties with the central government in Baghdad and the Kurdistan Regional Government (KRG) as leverage in the push against ISIL. Iranian authorities celebrate what they see as Tehran’s immediate response to aid Iraq against ISIL, and have published images of General Qasem Soleimani, the Commander of Quds Forces, in Kurdistan.

From Iran’s point of view, history is on its side: Once all is said and done, once US troops return home, Iran maintains the most battle-ready military force to offset regional challenges, buttressed with strong political ties with Iraq, Syria and Hezbollah. The Iranian leadership remains confident that this alliance will allow Tehran to shift the focus back on Israel, and allow Iran to reclaim its role as regional leader.

This article was written by Shahram Akbarzadeh for the opinion page of Aljazeera on NOV. 6, 2014. Shahram Akbarzadeh is Research Professor and ARC Future Fellow at the Centre for Citizenship and Globalisation, Deakin University, Australia.