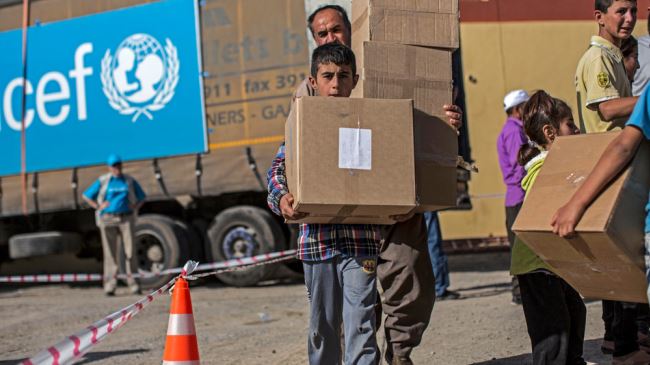 The United Nations has warned of “disastrous” conditions for more than one million displaced Iraqis fleeing ISIL terror, appealing for USD173 million to help the Arab country’s people withstand the incoming winter.

During a press conference in Geneva on Tuesday, Jens Laerke, a spokesman for the UN’s Office for the Coordination of Humanitarian Affairs (OCHA), said the displaced people in Iraq were being hit by “heavy rains, strong winds and storms and low temperatures” especially in the mountainous areas.

“The situation in Iraq is, as we have said on numerous occasions, disastrous. Hundreds of thousands are sheltering in unfinished buildings and public facilities, including schools or in informal settlements, as well as out in the open,” Laerke said.

He said that more than half a million Iraqis were in need of “immediate shelter support” while an estimated 1.1 million children would require “additional care” during the winter months.

The UN in Iraq is today calling for USD173 million to respond to people’s desperate need for assistance throughout winter, the official added.

About 1.9 million Iraqis across the country have fled the ISIL attacks since January, according to the UN.

The ISIL terrorists currently control large areas of Iraq. They have been carrying out horrific acts of violence, including public decapitations and crucifixions, against Iraqi communities such as Shias, Sunnis, Kurds, and Christians.