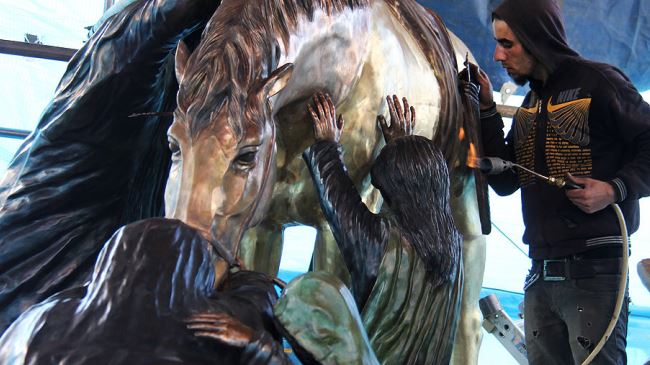 A sculpture artwork on Ashura created by Siavash Salimi

A three-dimensional work of art in the form of a sculpture depicting the Ashura tragedy has been unveiled in the Iranian capital city of Tehran.

The bronze sculpture was unveiled at Tehran’s Imam Hussein Square during a ceremony held on the Day of Tasua, November 3.

Dubbed “The Evening of Ashura,” the sculpture has been created by the Iranian artist, Siavash Salimi, who spent one year on crafting the work.

The Evening of Ashura was inspired by a painting with the same title by the world-famous Iranian painter, Mahmoud Farshchian, in 1976.

The name of the artwork gives a good indication of the time period that it covers, namely, the evening of the day of Ashura, when Prophet Muhammad’s (PBUH) grandson, Imam Hussein (PBUH), and his companions were martyred.

Around 680 AD, Imam Hussein (PBUH) along with his 72 followers was massacred in the battle of Karbala in Iraq by the forces of the tyrant ruler of the time, Yazid, the second Umayyad caliph.

The painting master, Farshchian, has created several works of art on Ashura depicting the bitter stories of the day.

Farshchian was chosen as an outstanding 21st century intellectual by Cambridge and has received an honorary doctorate in fine arts.