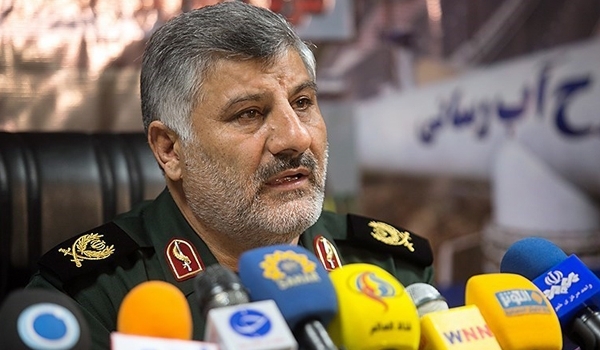 TEHRAN (FNA)- Head of Khatam-ol-Anbia Construction and Development Base Ebadallah Abdollahi downplayed the effects of the western sanctions against Iran, and said the country has managed to implement every project that has had a foreign contractor which has left Iran under the sanctions.

“The enemies thought what giant oil firms, Total and Shell, …left unfinished in Iran will not be implemented due to the economic sanctions, but with God’s grace and the efforts of our dedicated forces, these jobs are being fulfilled in a proper way and even better than the past,” Abdollahi, whose base is affiliated to the Islamic Revolution Guards Corps (IRGC), said in Western Iran on Sunday.

Khatam-ol-Anbia Construction Base is responsible for implementing macro-scale economic projects in Iran.

He said that Iranian experts and specialists are now able to carry out such tasks and projects that they couldn’t do before the Islamic Revolution and before the western sanctions were imposed against Iran.

Iran, which sits on the world’s second largest reserves of both oil and gas, is facing US sanctions over its civilian nuclear program.

Iranian officials have dismissed US sanctions as inefficient, saying that they are finding Asian partners instead. A large number of Chinese, Indian and other Asian firms have negotiated or signed up to oil and gas deals with Iran.

Iran signed gas deals worth $14 billion with Malaysia’s SKS Group in December 2008, which included a contract to build an LNG plant.

Following US pressures on companies to stop business with Tehran, many western companies decided to do a balancing act. They tried to maintain their presence in Iran, which is rich in oil and gas, but not getting into big deals that could endanger their interests in the US.

Yet, after oil giants in the West witnessed that their absence in big deals has provided Chinese, Indian and Russian companies with excellent opportunities to sign up to an increasing number of energy projects and earn billions of dollars, they started showing increasing interest to invest or expand work in Iran.

Some European states have also voiced interest in investment in Iran’s energy sector after a gas deal was signed between Iran and Switzerland in 2008 regardless of the US sanctions.

The National Iranian Gas Export Company and Switzerland’s Elektrizitaetsgesellschaft Laufenburg signed a 25-year deal in March 2008 for the delivery of 5.5 billion cubic meters of gas per year.

Also a deal, worth €100m ($147m, £80m), was signed by Steiner Prematechnik Gastec, the German engineering company, in 2009 to build equipment for three gas conversion plants in Iran.

In December 2010, the New York Times reported that over the past decade, United States-based companies have done billions of dollars in trade with Iran despite sanctions and trade embargoes imposed on Tehran.

One American company, the daily said, was permitted to do work on an Iranian gas pipeline, despite sanctions aimed at Iran’s gas industry in particular.

The transactions have been made possible by a 2000 law that allows exemptions from sanctions for companies selling food or medical products, the report added.

Iranian officials have always stressed that the International and unilateral sanctions against Iran have had no result but inflicting damage on the European companies.