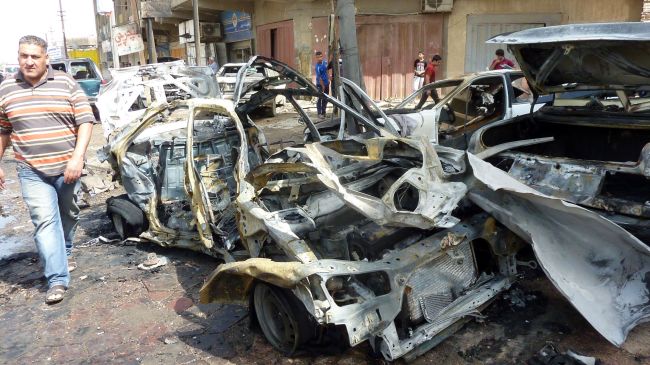 Multiple bomb explosions have killed at least 34 Shia pilgrims in the Iraqi capital, Baghdad, amid the violence that continues to plague the country.

In one of the blasts in the neighborhood of Sadr City on Sunday, 14 people lost their lives near a tent used by Shia pilgrims.

The pilgrims were preparing to commemorate Ashura, which is the tenth day of the lunar month of Muharram and marks the anniversary of the martyrdom of Imam Hussein (PBUH), the third Shia Imam.

Earlier in the day, two other bomb attacks in the city killed at least 20 more people.

Imam Hussein, the grandson of Prophet Muhammad (PBUH), and 72 of his loyal companions, were martyred on Ashura in the battle of Karbala against the second Umayyad caliph, Yazid I, in 680 A.D. Imam Hussein was killed after he refused to pledge allegiance to the tyrant ruler.

The mourning services have been in place worldwide since the beginning of Muharram.

The bombings come as latest figures provided by the United Nations show that violence in Iraq claimed at least 1,273 lives in the month of October alone.

The UN casualty figures are lower than the death toll reported by the Iraqi government. According to Baghdad, the statistics gathered by the health, interior and defense ministries suggest that 1,725 civilians and security forces were killed in October.