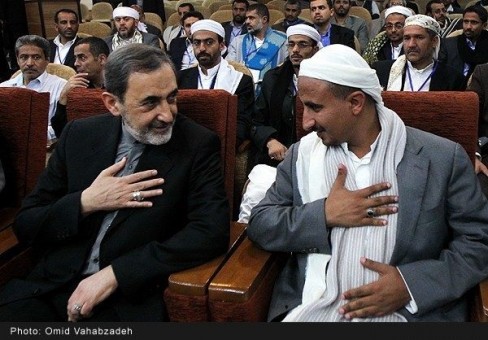 Yemeni Zaidi scholars: Ayatollah Khamenei is the leader of the Islamic world

Some Yemeni Zaidi scholars in a meeting with the General Secretary of the international Islamic awakening association emphasized that Ayatollah Khamenei is not just Iran’s leader but the leader of all Muslims in the world.

On Saturday evening of 18th October, Dr Velayati the General Secretary of the international Islamic awakening association met with some Zaidi scholars from Yemen and said: “We are aware of your victories and we are very glad about it. Our relation with Houthis go back a long time and we are familiar with the thoughts of Allama Sadru Deen Houthi who is the spiritual leader of Ansarollah and the father of the martyr Hossain Houthi and Abdolmalek Houthi who is the leader of Houthis in Yemen. I am happy that the Houthi and revolutionary leader of Yemen lead wise and brave movements in that country.”

Dr Velayati added: “Ansarollah brought about a transformation in Yemen which is unique in the history of this country and Ansarollah’s consecutive victories prove that everything is based on an organized plan”. He indicated that they should learn from the past events and overcome the obstacles one by one.

He continued: “We know that your goals have not been achieved during the past 3 years after the downfall of Abdullah Saleh. What was known as “Gulf transition Plan” was not suitable for Yemen and Ansarollah refused this plan wisely.”

He stressed that the Islamic Republic of Iran is very proud of Ansarollah’s brotherly treatment of other religions and they hope a role like Hezbollah’s in Lebanon is played by Ansarollah in Yemen. Mentioning Lebanon’s Hezbollah cooperation with Lebanese Army, Velayati stated: “In the last years Lebanese Army and Hezbollah fought together against the terrorists and defeated them. The fact that Yemeni Army cooperated with Ansarollah in Sana’a is a proof that Ansarollah has public acceptance in Yemen.”

In a response to a question asked about the effects of Yemen’s revolution, he expressed: “The important issue is that the road to freeing Palestine passes from Yemen since Yemen has a strategic location and is near Indian Ocean, Gulf of Oman and Bab el-Mandeb.”

At the end he stated that supporting the campaign for freeing Palestine and supporting the resistance can be one of the most important favors of Yemen for Palestinians. He continued: “In the last war in Gaza, the only country which supported Palestinians, both in deeds and words, was the Islamic Republic of Iran. The Palestinian leaders in Gaza announced that what they had and what helped them in the fight against the Zionists was Iranian’s support.”

Zaidi scholars in this meeting also stressed that Ayatollah Khamenei is not just leader of Iran but he is the leader of the entire Islamic world.