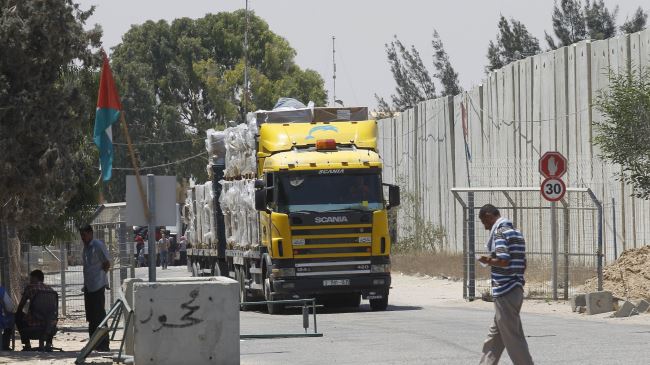 The Israeli military has shut down two border crossings with the besieged Gaza Strip, after the alleged firing of a rocket from the coastal enclave towards the occupied Palestinian territories.

“The crossing points for people and goods, Erez and Kerem Shalom, have been closed until further notice,” an army spokeswoman, speaking on condition of anonymity, said on Sunday.

She claimed that the restriction was imposed after a rocket fired from Gaza struck the Eshkol area in southern Israel on Friday, without causing any casualties or damage.

The development comes as Egypt has recently closed the Rafah border crossing, which is the only terminal linking the Palestinian territory to the outside world that bypasses Israel, after deadly attacks in the volatile Sinai Peninsula.

Gaza has also been under Israel’s blockade since June 2007, a situation that has caused a decline in the standards of living and poverty in the coastal enclave.

The closure of the crossings comes amid attempts inside Gaza at reconstruction of the ruins of Israel’s latest war on the enclave, which killed about 2,140 Palestinians and left more than 11,000 others injured.

The Israeli regime started the war on the impoverished Gaza Strip on July 8. The Israeli strikes ended on August 26 with a truce that took effect after negotiations in the Egyptian capital city of Cairo.