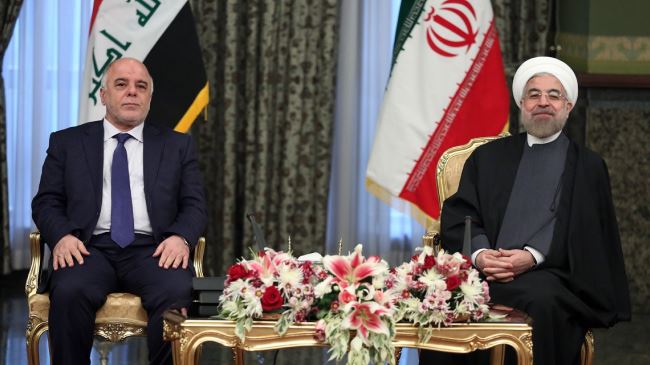 Al-Abadi’s Tehran visit: Continuation of Baghdad’s policy toward Iran or change of view?

Iraq’s new Prime Minister Haider Al-Abadi paid an official visit to the Islamic Republic of Iran recently, which was in fact his first foreign trip following his appointment to the post. The trip has raised important questions about the possible outlook of Iraq’s foreign policy and relations between the two neighboring countries under the new Iraqi government. What messages and signals has Abadi meant to convey by choosing Iran as the destination of his first regional visit? Another important question is what kind of approach to regional developments under new conditions has prompted the Iraqi prime minister to travel to Iran? Another important question is about the possible impact of the trip on the country’s foreign policy: to what extent the past policies and approaches of the Iraqi government will continue under the new prime minister and to what extent they will be changed?

In view of the above questions, the issue that is of more importance is to have a good grasp of the internal logic of the Iraqi foreign policy during post-Saddam period before comparing it with the new conditions of this country both at domestic and regional levels. If this happens, one could have a correct understanding of the present foreign policy of Iraq and its relations with Iran and could also correctly forecast the country’s future approach in this field. The conflict of approaches and interests among various Iraqi political groups has led to certain conflicts and challenges in the country’s foreign policy. This state of affairs has prevented integrity and balance in Iraq’s foreign policy. Despite this fact, it cannot be ignored that it would have been difficult, if not impossible, to imagine a new political system in Iraq without support from Iran and special relations that exist between Tehran and Baghdad. In fact, during the past decade, the political process in Iraq and its foreign relations have been under heavy influence of Iran both in terms of geopolitics and practical components, and also in terms of identity-related and subjective elements.

On the one hand, due to certain geopolitical variables, including long borders as well as ethnic and religious intermingling, Iraq has been always willing to have amicable and developed relations with Iran as an important neighboring country. On the other hand, identity-related and subjective factors as well as discourse-based elements have encouraged the Iraqi leaders to do their best to get more support from Iran in order to go on with their new political process and fight the crises ahead of them. Therefore, regardless of who is at the political helm in Baghdad, the question about the quality of relations between Iran and Iraq and how to take advantage of Iran’s available capacities to improve political and security conditions in Iraq, would remain a basic and essential question.

While Iraq has not enjoyed the necessary support from most political players in the Middle East during the past years, Iran has been known as the sole source of support for the Iraqi government following the fall of the country’s former dictator, Saddam Hussein. As a result, Tehran has served as a factor to guarantee the progress of the country’s political process. However, the appointment of Haider Al-Abadi as the new Iraqi prime minister has been welcomed by regional and international players and has raised hopes that Iraq would move to improve its foreign relations. It should be also noted that to overcome the crises with which it is grappling right now and drive the ISIS Takfiri terrorist group out of the country, the new Iraqi government needs both practical and field support.

Under Haider Al-Abadi as prime minister, Iraq has apparently a better understanding of the necessity for expanding cooperation and regional relations and this is why the new Iraqi government has made multilateralism the cornerstone of its foreign policy agenda. As a result, the Iraqi government has been paying special and serious attention to the expansion of interactions with such important countries as Turkey, Saudi Arabia and Jordan and believes that promotion of regional cooperation is needed to overcome the ISIS terrorists. However, this approach does not mean that expansion of interactions with those countries will change or weaken relations and cooperation between Iran and Iraq. This is true because while trying to develop effective relations with Iran, the new  Iraqi government is also trying to get all the support it can in order to restore stability and security to the country. In other words, the efforts made by Al-Abadi’s government to expand ties with other countries cannot be taken as a sign of his government distancing from Iran. The new prime minister is trying to add new capacities to the existing regional capacities in order to both improve the conditions inside the country and help with the ongoing fight against terrorism across the region.

On the whole, the fact that Iran has topped the list of countries that Al-Abadi is to visit in the region at a time that he is also planning more meetings with other regional leaders, all indicate that the new Iraqi government is trying to maintain some elements of past regional policies while changing some other components of those policies. The continuation of past policies is where Iraq wants to maintain and further expand relations with Iran while changes have been made to non-friendly components of Iraq’s past foreign policy in order to improve relations with other regional states. The continuation and expansion of relations with Iran is a geopolitical and identity-related necessity for Iraq. The Iraqi leaders are well aware that when it comes to action, Iran is perhaps the only country which can help to head off security threats posed to their country. This issue has been quite evident during certain military operations that have been recently carried out in Iraq as a result of which the country’s military and security forces have been able to resist against the militants. Nonetheless, the new Iraqi government has reached the understanding that it would not be able to manage the ongoing crisis in the country by merely relying on Iran’s cooperation and support. Therefore, in addition to the continuation and expansion of cooperation with Iran, the new Iraqi government should pay due attention to attracting necessary support from other players in the region. The least that the new Iraqi government can do is to prevent other regional players to put obstacles on the way of the Iraqi nation’s progress and prevent objective threats from harming the country.