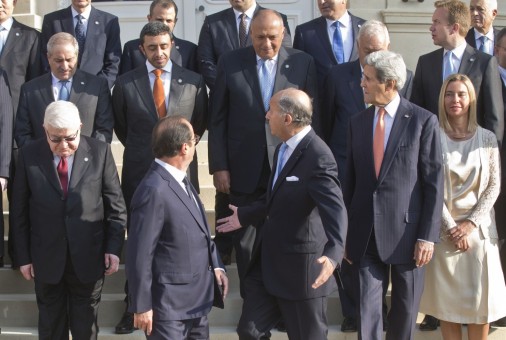 Why Tehran didn’t cooperate with Washington against ISIS

These days Paradoxical behavior of US government in the world has been revealed more than ever, making it harder to analyze their behavior. The greatest paradox which has remained unanswered by them is forming coalition and planning to attack the extreme groups which they have played a significant role in creating them.

US change of opinion regarding Islamic Republic of Iran is obvious more than ever these days. Iran’s role in fighting against ISIS has made White House officials show dual behavior. One day officials in the US department of state talk about not inviting Iran to the so called anti-ISIS coalition summit in Paris and the next day they claim to be open to discuss the matter of ISIS terrorists with Iran.

A few days ago Marie Harf, Deputy Spokesperson for US Department of State, stated: “We are not coordinating with, we do not want to coordinate with, we are not planning to coordinate with Iran in any way on Iraq.” and John Kerry, US Secretary of State, said that Iran’s participation in the coalition against ISIS is not appropriate and due to so many reasons, there’s no room in anti-ISIS coalition for Iran.

However Iran’s leader speech, after his discharge from hospital, made US secretary of State mediate his political stance hurriedly. On US officials’ claims, Ayatollah Khamenei reiterated: “In the first days of ISIS appearance in Iraq, Americans made outreaches to us through their ambassador and our ambassador in Iraq and requested to gather together and cooperate on ISIS issue. Our ambassador conveyed the message. Some of our officials agreed. I was against it and said that we wouldn’t cooperate with US in this issue… This US Secretary of State who said “We don’t Cooperate with Iran” in the public, had personally asked Dr. Zarif to cooperate in this issue, but Dr. Zarif refused him.”

These statements disrupted the game which was prepared by Americans. In a short while after Iran’s leader speech and in a reaction to this matter, US secretary of State said that US was open to talks with Iran on Islamic States and this discussion could be followed on the sidelines of nuclear talks in New York.

A few days later, as expected of US zigzag behavior, John Kerry talked about not inviting Iran to the coalition against ISIS and said this was the condition set by some countries in the region which were against Iran’s presence in the conference. On Monday after the end of the conference in Paris, Kerry stated that The United Arab Emirates and Saudi Arabia were part of reasons for US opposing Iran’s presence in the conference. He added that Saudi King Abdullah had told him that if Iran attended Monday’s session, the Saudis would boycott and The United Arab Emirates had drawn the same line.

But it was not the end to US officials’ reactions. In a reaction to Islamic Republic’s speech on US requesting Iran to join anti-ISIS coalition, Jen Psaki, Spokesperson for The US Department of State, wrote in her Twitter: “It’s no secret that we have had discussions with Iran about the counter-ISIL efforts in Iraq on margins of our P5+1 talks on nuclear issue.”

US authorities’ statements such as what Kerry and Psaki said were actually confirming what Iran’s leader had said and an absolute confirmation of requesting Iran in cooperating in ISIS issue. This is while there were serious arguments between countries present in anti-ISIS coalition on Iran’s Presence in the conference and France as the host of the conference had wanted to invite Iran to the talks. Furthermore in a press conference after the coalition conference against ISIS in Paris, Ibrahim al-Jaafari, Iraqi Minister of Foreign Affairs, said that Iraq was sorry about Iran not being invited to the conference and that they had insisted on inviting Iran but they didn’t have the final say.

The reason why Iran refused to cooperate with US can be investigated in several aspects,

– Iran’s pessimism about US policies

One of the reasons for Islamic republic opposing cooperating with US is their pessimism about US policies in the world and in West Asia in particular. US was involved in numerous terrorist acts in Gaza and Iraq and Afghanistan wars, whether directly or indirectly. Iran’s supreme leader confirmed this in one of his speeches and said: “We don’t assume US being honest in fighting against terrorism. They’re not honest and they don’t tell the truth. They have other objectives. We don’t assume US righteous in leading the world against terrorism. US hands are stained with all the crimes the Zionist regime has committed these years and is following them in absolute cruelty and brutality…I’ll repeat it for the sake of Iranians and the world’s public opinion, that Iran won’t participate in any event which is led by the United States”

From this perspective, not cooperating with US in its greed in the region has always been part of Iran’s guideline and Iran has always avoided any act that would turn it into US partner in its crimes.

– US plan for Balkanizing Iraq and Syria

It seems that US and its companions’ attack to Iraq would lead them achieve one of their most important goals. The White house has always wanted to Balkanize Iraq and Syria and attacking these two countries would act as a catalyst in Balkanizing them.

US absolute support for independence of Iraqi Kurdistan and US officials’ support of holding a referendum in this region is a proof. The reason for Balkanizing is to create instability and chaos and decrease the threat of a powerful country in the region and US wants to annihilate the possible threats of two powerful countries; Syria and Iraq; in the region. As these countries are near the ring of resistance, Balkanizing them will have direct impact on the region’s resistance.

This is a scenario Iran forecasted in case of US re-attacking Iraq and Syria. But Iran’s leader after his discharge from the hospital said: “US wants to find an excuse to do what they currently do in Pakistan, entering Pakistan without permission, even in the presence of its government and a powerful Army-Pakistan Army is powerful-, and bombarding wherever they want. They want to do the same in Iraq and Syria. They must know that in doing so, they would face the same problems they encountered in Iraq in these last 10 years.”

Free riding is a financial term which is used a lot in international affairs too. It’s used when someone wants to receive the benefits of a “public good” or a “positive externality” without contributing to paying the costs of producing those benefits. What happened in US attacks to Iraq and Syria was exactly this way. As the American experts say, Iran benefited the most in US attacks on Iraq and Afghanistan when Taliban and Iraqi Ba’ath regime, which where two great enemies of Iran, were demolished in these attacks and now Iran has a strong influence over these countries.