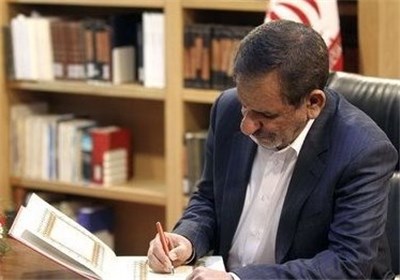 TEHRAN (Tasnim) – Iranian First Vice-President Eshaq Jahangiri on Saturday expressed the hope that “brotherly” relations between Tehran and Algiers would be deepened in all spheres.

In a message to Algeria’s Prime Minister Abdelmalek Sellal, Jahangiri congratulated the Algerian people and government on the occasion of the country’s national day.

“Regarding the numerous commonalities between the Islamic Revolution of Iran and the Algerian Revolution and in light of all-out efforts made by the two countries’ officials… I hope that we witness further expansion of friendly and brotherly ties in all areas,” he said in the message.

Jahangiri also wished good health and success to the Algerian premier and prosperity for the Muslim people and government of the country.

Each year, Algerians celebrate their national day, also known as Revolution Day, on November 1. The national holiday commemorates the day in 1954, in which Algerians began their revolution against the French, who had ruled the North African country since 1830.