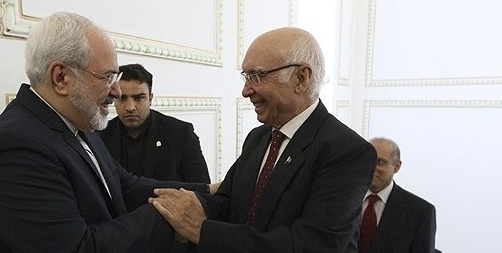 In a meeting held on the sidelines of the Fourth Foreign Ministerial Conference of the Istanbul Process on Afghanistan in Beijing exchanged viewpoints on issues of mutual interest, especially the prevailing conditions in the region.

The two sides also discussed effective moves to encounter the terrorist groups’ moves along the shared borders of the two countries.

The meeting came a few weeks after the death of four Iranian police officers in attacks by terrorist groups in the southeastern town of Saravan, near the border with Pakistan.

In February 2013, Iran and Pakistan signed a security agreement which requires both sides to take strict measures to combat terrorism and human and drug trafficking.

But the Pakistani side has frequently failed to fulfil its obligations under the agreement.

In February this year, five Iranian border guards were kidnapped by a terrorist group in Jakigour region in Iran’s Sistan and Balouchestan province and taken to Pakistan.

Four of the five were released and returned home after being held hostage for two months but the fate of the fifth one still remains unclear.

As regards establishment of peace and stability in Afghanistan, the top Iranian and Pakistani officials underlined that comprehensive efforts by all member countries in the conference is needed for achieving tangible goals in Afghanistan.