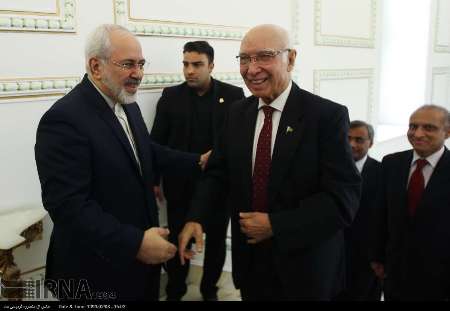 Zarif and Aziz in the meeting on the sidelines of the Fourth Foreign Ministerial Conference of the Istanbul Process on Afghanistan in Beijing exchanged viewpoints on issues of mutual interest, especially the prevailing conditions in the region.

On contributing to establishment of peace and stability in Afghanistan, the top Iranian and Pakistani officials focused on Tehran-Islamabad shared stands, as well as each countries’ national interests, reiterating that comprehensive efforts by all member countries in the conference is needed for achieving tangible goals in Afghanistan.

Adopting effective moves to encounter the terrorist groups’ moves along the shared borders of the two countries, too, was one of the axes of Zarif-Aziz talks.

The conference was held as new Afghan President Ashraf Ghani was wrapping up his four-day trip to China.

China’s hosting of the annual conference highlights its growing role in Afghanistan as most U.S. and international troops prepare to leave by the end of the year.