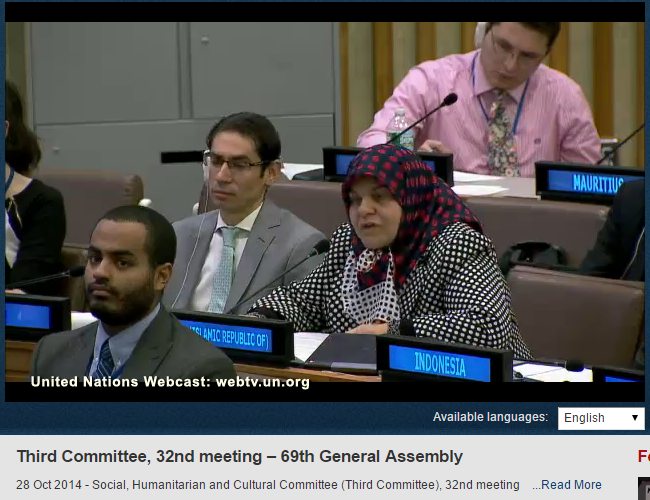 (Reuters) – Iran on Tuesday dismissed a U.N. investigator’s allegations of severe human rights abuses in the Islamic Republic, saying the criticisms were aimed at inciting “Iranophobia and Islamophobia.”

The latest report, by U.N. special rapporteur on human rights in Iran Ahmed Shaheed, says executions in Iran have sharply increased since President Hassan Rouhani’s election last year. He said torture is used in prisons, the situation of women has deteriorated and religious minorities are still persecuted.

Iranian envoy Forouzandeh Vadiati told the U.N. General Assembly’s Third Committee, which focuses on human rights, that its discussion of her country was a “fruitless annual ritual.”

She said Shaheed’s criticisms were encouraged by “certain countries’ foreign policies” and “the final gain that they aim to achieve is to enhance their project of Iranophobia and Islamophobia.”

Vadiati also rejected the idea that the situation of women in Iran has deteriorated. Shaheed’s report said the number of women enrolled at Iranian universities has decreased to 48 percent in 2013-2014 from 62 percent in 2007-2008.

“Laws, polices and practices that discriminate against Iranian women and girls continue to institutionalize their second-class status,” Shaheed told the Third Committee meeting.

Vadiati denied that there were problems for Iranian women.

“As an Iranian woman I never experienced such allegations as raised by the special rapporteur,” she said.

Vadiati also dismissed the idea that torture was used in Iran, noting that it is illegal under Iranian law.

Speaking to reporters on Monday, Shaheed expressed shock at Iran’s weekend execution of Reyhaneh Jabbari, a 26-year-old woman convicted of murdering a man she accused of trying to rape her as a teenager. Shaheed said he had repeatedly voiced concerns to Tehran about her trial.

Vadiati did not refer to the case of Jabbari.

“We will continue our efforts to the promotion of human rights, not as a result of a politically motivated mandate and resolution, but rather because of the will of our people and government,” she said.

The European Union is drafting a General Assembly resolution condemning human rights abuses in Iran. It is expected to go to a vote in the Third Committee in the near future.