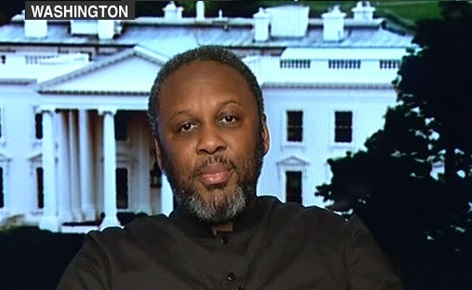 American activist Randy Short interrogated by US after Iran visit

American human rights activist Randy Short has been interrogated by US security officers after attending an anti-Zionist conference in Iran.

Dr. Randy short is an American human rights activist who is a lay minister in the Christian Church and an active member of Southern Christian Leadership Conference, Black Agenda Reports, Judicial Justice Movement and African American for Human Rights, participated in the second international “New Horizon” conference in Tehran in late September in which about 30 Authors, filmmakers, thinkers, activists and journalists participated to discuss the Zionism and the world imperialism. In a note, he explained how he was treated and interrogated by US security officers after attending the conference in Iran. Here comes the complete note written by him:

“On Thursday, October 16, 2014 at 4:50 a.m. I departed Imam Khomeini International Airport in Tehran, Iran on flight QR 485 for the Qatar International Airport at Doha. I departed Doha on Qatari Airlines flight 707 which left about 9:15 a.m. en route for the airport named for a man who helped engineer the 1953 MI6-CIA coup called Operation Ajax that toppled the democratically elected Iranian President Mohamed Mossedegh. QR 707 landed around 3:20 p.m. (Eastern Standard Time) Thursday, October 16, 2014. The immigration passport control lines were long, because the airport did not have all of the check points staffed. I was sent to checkpoint 30, and I saw an African American man being treated harshly by the Border Security officer Mr. Hernandez who took close to 15 minutes to handle a 2 minute process, and the Black man looked visibly distressed and angry. I told the other people in same queue as I this was the racial profiling line, and joked about the fact that the foreigners were passing through passport control much faster than the Blacks because the USA did not want us to return and we were the greater enemy in their minds than foreign terrorists. About 3:55 p.m. Officer Hernandez took my documents at customs gate number 30, and I could see the fiendish delight he had when he saw my visa to visit Iran, as his eyebrows were raised that look odd on his vitiligo pocked skin. On three separate prior occasions I have experienced difficulty on re-retry to the United States, twice it was Hispanic security persons who are more racist than whites toward African Americans. As he handed my passport back he snarkily quipped without looking me in my eyes, “welcome to the United States”, as if I were not returning to my land of birth.

As I walked away wondering why he did not question me as much as the Black man in line before me, I waved to a Black woman who had been in line who had witnessed the racial profiling of Hernandez. Before I could leave the passport control check area, a white US Border Security officer approached me and said, “Sir, I need your passport and we need to question you for a few minutes”, quickly seizing my passport. He inquired of whether I had collected my bags, knowing full well that I just cleared customs. He further detailed that my things would have to be searched. I told him that I did not know where my baggage was, and he told me carousel 6 was where my luggage was that I should collect it and meet him at the checkpoint. I checked my phone it was 4:00 p.m., and I went to carousel 6 and looked for my luggage also trying to make calls to my friend Ashira and my mother to tell them I was being detained. My phone’s battery began rapidly dying and the receptivity of my cellular to the signal was frustrating. I did get to Ashira, and I asked her to call my mother, who I had spoken to upon landing, and Madame Marzieh Hashemi of Press TV who is like my sister and protector in all things Iranian. I returned to what I assumed was the checkpoint for the departure of the passport clearance, and I looked for the man who took my passport. Nobody could help me, and I was not going to look for him, because some racist fool would accuse me of trying to run away or evade protocol. So, I stood there, and, then, I began asking people “where is the man who took my passport?” Eventually, the Border Security people found him and he motioned me to follow him through customs. Clearly I was being detained by the United States Border Security Officers at John Foster Dulles International Airport.

Before going to the customs area, I noticed a film crew of the United States Border Police filming the passport control area. Later I learned that my arrival day was the same day for Ebola screenings. Upon arriving the detention area, I noticed what I had anticipated for days a large room full mostly of Arabs, Iranians, Latin Americans, Africans, Asians, Blacks, and a token white or two to mask the racial nature of what Americans want people to believe is random sampling. Two officers, instead of one, began to ask me about Iran, why I went, who I went with, how much money I had, what was my job, where did I travel in Iran, where did I stay, Who did I stay with, did I meet with government officials, did Iranians show hatred for America or did I experience difficulties, what was New Horizons, why was I selected to go to Iran, what was my phone number, did I intend to return to Iran in the immediate future, what was the nature of my human rights work? They told me my bags had to be searched I was asked did I have any dangerous objects in my bag, something such as a knife? One officer complained out loud “you really like to read don’t you.” This was after they saw my photos and books of dear brother Ayatollah Khamanei and the late Ayatollah Khomeini and my Holy Qu’ran and other books and films. I was told that everything in my bags had to be put in a special device and to take a seat. This was at 4:30 p.m. I must admit the Border Officers were professional and polite, if only this were the case for Michael Brown, Ezell Ford, Eric Garner, and John Crawford black men martyred by the racist security state forces.

About one hour later I was questioned again regarding my money and did I meet any Iranian leaders presently in office? I told the man who had search my computer and camera that I had met with Ahmadinejad, but the officer said that he was not an elected official, but wanted to know why I saw him. I told him Dr. Ahmedinejad was a Philosophy professor, and we discussed philosophy. I think the second questioning, which the officer claimed was because his partner lost my earlier responses, was a trick to see if my replies would change. During this time the film crew was wrapping-up their activities, and then, suddenly, the Border Police began letting people leave with their passports and baggage, of course the whites were released first. The room’s detainees got darker in complexion as the crowd got smaller. About 6:45 most of the people still being held had come from the Middle East or were Black. By 7:00 p.m. it was just myself and one other person. I was released at 7:30 p.m. the last and only person waiting to be allowed to leave. I could have avoided the lengthy search process by leaving all the wonderful books in Iran, but I cannot lie or hide my sense of solidarity with the people of Iran and their revolution and global struggle to help hated and persecuted minorities like we African Americans. I will always love Ayatollah Khomeini who fought racist Apartheid and released the Blacks captured by heroic patriotic Iranian students that forced an end to the nest of espionage that conspired to bring-down the Islamic Republic of Iran. I made a vow to God in 2005 to be a friend to the people of Iran and I will not violate my oath to my Lord. Let them see my books, perhaps they should read of the crimes of America in my martyred Libya, Somalia, Nigeria, Iraq, Pakistan, and so forth. Iran and Iranians are a beautiful and cultured people who have existed for 12,000 years and been peaceful people, and I find no fault in their wanting to follow the third path as prescribed by Ayatollah Rohullah Khomeini.

This is how I experienced by detained for about 3.5 hours by the United States Border Security Officers at John Foster Dulles International Airport and this mirrors what was done to my friends Cyrus McGoldrick and Caleb Maupin who bravely dared to visit the Islamic Republic of Iran. I knew I would be detained, and, yet, I hope to see Iran again and again. Inshallah, God will bless me to be in the presence of the wonderful people that I met there.