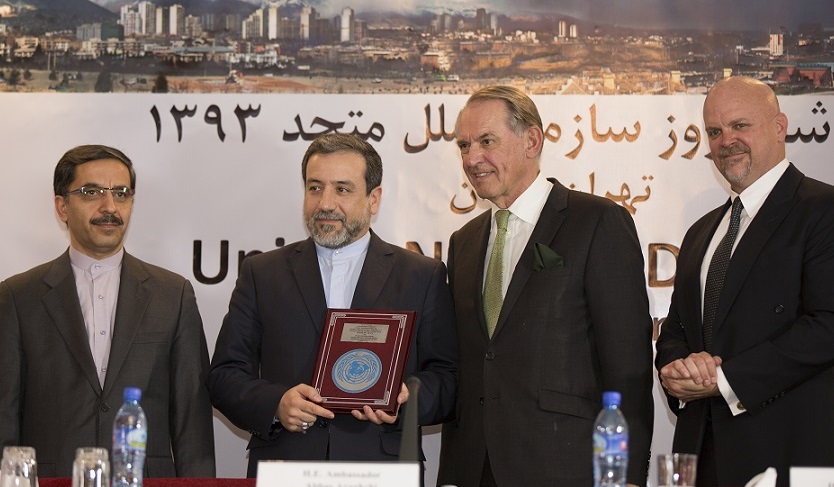 24 October has been celebrated as United Nations (UN) Day since 1948.  UN Day marks the anniversary of the entry into force in 1945 of the UN Charter.

This year, in Tehran, the event was commemorated on 29 October, at a ceremony jointly organized by the Government of the Islamic Republic of Iran and the UN with the presence of Deputy Foreign Minister of Iran, H.E. Dr. Seyed Abbas Araghchi and UN Deputy Secretary General, H.E. Mr. Jan Eliasson.  Other participants included government officials, diplomatic ambassadors, the UN’s key national partners, media, and other UN staff.

Mr. Lewis then thanked Dr. Araghchi, Iranians present in the audience, representatives of other countries as well as Mr. Eliasson for joining him and other UN Staff to celebrate the UN Day.  In this regards he said: “Your presence symbolizes the energy and vision with which the United Nations wishes to partner with and support the Islamic Republic of Iran – one of our founding Member States – at this crucial time in its history.”

“The UN exists to make positive change possible.  Peace and security – justice – human rights – development – and the fundamental freedoms – these are the purposes of the United Nations, as set down in our Charter.  Our Charter has, for 69 years, remained the living, beating heart of our organization.  And these noble goals direct our efforts.  They guide our work – and our destiny.  They inspire our commitment to a better future – a shared future” said Mr. Lewis.

“I am very glad to celebrate the UN Day with you here in Iran – with the representatives of the Government, the civil society and the diplomatic core” said Mr. Jan Eliasson. Photo Credit: Kamyar Minoukadeh

In his remarks Mr. Eliasson said: “I am a longtime friend and visitor to this country.  I first visited Iran in 1980 […] and during the conflict between Iran and Iraq from which your people and Iraqi people suffered from a lot – I visited Iran probably around 20 times.  It took far too long for that horrible war to end.  From 1988 to 1992 I served as the Secretary-General’s Special Representative on Iran/Iraq.  During this time I spent enumerable hours in negotiation with many Iranian friends and colleagues during that period, and I am very glad to meet with them again here in Tehran.  Last time I visited it was as Deputy Foreign Minister for State-Secretary of Sweden in late 90s.”

“I am very glad to celebrate the UN Day with you here in Iran – with the representatives of the Government, the civil society and the diplomatic core” said Mr. Eliasson.

He added: “I think this is a fitting occasion for me to share with you some points on how I see the world today […] It is almost a banality perhaps to say, but we live in a remarkable period of more turmoil and more turbulence than I can recall for a long time.  There is also a high degree of uncertainty about development.  Most of the political, economic and social spheres are faced with global challenges which translate themselves to the regional level and to the national level and also the local level – we are all intertwined.  The solutions we have to find have to be more innovative and more forward looking than ever before.  So we face huge challenges in all the three areas that we have on our agenda; whether it is peace and security, development or human rights.”

Speaking at the ceremony Dr. Araghchi said: “At the outset, I would like to say how delighted I am to see an old hand, our dear friend, Mr. Eliasson […] As one of the longest serving and devoted officials of the United Nations and during your leadership, you have stood at the organization’s helm, by taking many political, diplomatic and organizational initiatives of high importance, to achieve an organization more relevant to the people of the world.  You have proved yourself a global citizen of the first rank.  I salute you for your decades of dedication and service.”

Mr. Araghchi added: “Unfortunately, as a result of poverty, inequality and injustice our world is still suffering from internal and external conflicts, terrorism, extremism and violence.  Unfair economic sanctions imposed by world powers have made the process of achieving development more difficult for developing countries.  At this crucial time in history, the United Nations must act as a key player in leading the way and defining solutions for overcoming these global challenges.”

The event included testimonials from three Iranian people who spoke about how the work of the UN – in partnership with the Government of Iran – had changed their lives for the better.

During the ceremony a summary report entitled The UN in Iran: Key Development Achievements and Results 2012 – 2013 which highlights the work completed during the mentioned period under the United Nations Development Assistance Framework (UNDAF) for Iran was launched.  The UNDAF is the overall guiding strategy for the UN’s development work in Iran, which was discussed and agreed upon with the Government in 2011.

Following the event, participants were invited to visit an exhibition in which UN agencies in Iran had setup information stalls to answer questions and share their publications, to raise awareness about their work in Iran.